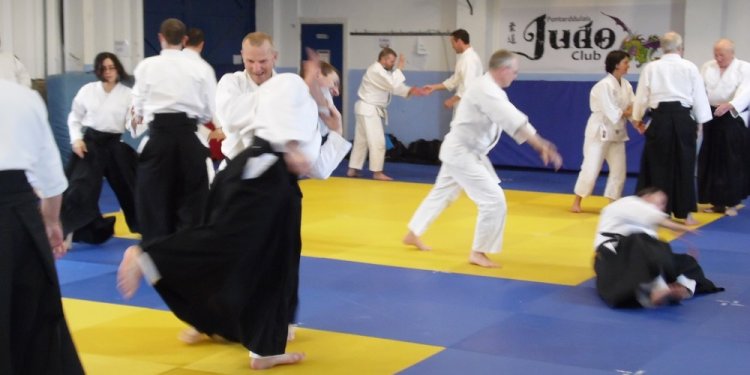 Shihan Doak was in turn, the only student to be instructed in jujitsu by the late Steadman Davies M.B.E., Sensei of the Sanshirokwai Judo, Aikido and Yoga club, Llanelli.

Shihan Doak opened his first jujitsu club in Carmarthen, in 1992 and prior to his passing in 2009, instructed students in Carmarthen, Llanelli, Swansea, Neath and Port Talbot, on a weekly basis. He also instructed a number of students through affiliation to the Goshin JuJitsu Association, both in the U. K. and elsewhere in Europe.

"Shihan Doak is, in my opinion, the most efficient exponent of jujitsu that I have ever seen"

Sensei Barry Davies continues to teach Goshin JuJitsu with the same traditions, standards and ethics instigated by Shihan Doak but using his unique teaching style and dynamic approach, to deliver classes to suit the knowledge, experience and abilities of the students. He encourages self-confidence and develops adaptive techniques to counter live situations, ensuring the future of the Goshin JuJitsu Association in South Wales.

The development of human physiology has resulted in a natural aptitude for grappling that is ingrained to some extent in each of us. Effective unprotected striking can take months or even years of rigorous conditioning in order to minimize the damage to the striker.

Jujitsu has been developed over hundreds of years and honed to maximize our natural aptitude for grappling in order to exploit the weak points of an opponent's body while re-directing his or her own force against them. Jujitsu has a vast number of techniques available giving practitioners a far greater scope to ' find what works for them ' than exists in other martial arts.

JuJitsu (also known as Jiu Jitsu, Ju Jutsu and ju-jitsu) was developed as an unarmed combat, self-defence technique by the Samurai warriors of feudal Japan.

JuJitsu is recognized as the parent martial art of Karate, Judo, Aikido and Sambo, as well as influencing many other fighting styles currently used in mixed martial arts competitions and sporting events worldwide.

The Goshin JuJitsu Association UK Wales, places an emphasis on the traditional Japanese techniques while incorporating an array of modern skills introduced through the knowledge and experience of our founder Shihan Doak and our Chief Instructor Sensei Davies.

Goshin JuJitsu provides you with the self-confidence to evaluate any situation and implement the appropriate measures to control the outcome. Shihan Doak stated that Goshin JuJitsu is, "The ultimate art for self-defence"