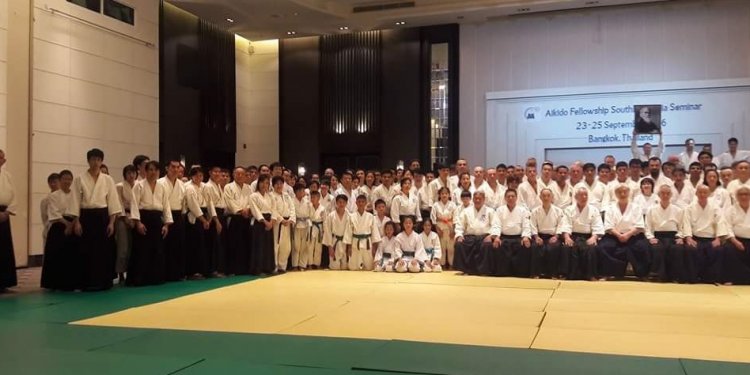 I love traveling. I always get nervous before leaving, convinced that I am not adequately prepared, anxious about all the accidents that might befall me. Then I leave my comfort zone and rediscover how capable I am. The world becomes someplace exciting and new to explore, while my anxieties appear slightly ridiculous. My trip to Japan was no exception.

Above: Mount Fuji at an ungodly hour of the morning

I went to Japan with the stated purpose of improving my Aikido practice and learning more about what it means to be a leader. Aikido is a Japanese martial art largely focused on self-defense and the redirection of an attacker’s force. I have been practicing it for about three years here in Portland, at a dojo (training hall) founded by the foremost woman practitioner in the world. Her name is Yoko Okamoto Sensei. She moved back to Japan long before I began studying Aikido at her dojo. She visits once a year, but I mostly saw her from afar. I hoped that my trip to Japan would give me the chance to learn from her a little more closely, not only getting better at Aikido but also learning how to be a leader.

I wasn’t disappointed in my stated goals, but I was surprised by what else I learned. Yoko Sensei leads her community in a different way than I had pictured. In my mind, leadership has always been like captaining a ship. Sure, you need the help of a crew to keep it running, but the captain is the person at the wheel steering the vessel. They shouldn’t make unilateral decisions about direction without consulting the crew, but they are primarily in charge of everything. Yoko Sensei’s brand of leadership is very different. I would compare it more to a gardener in her garden. She has to choose where to prune, where to weed, and where to let things grow wild, but her job is less to direct than to nurture. She has succeeded when her garden is a harmonious blend of all its individual elements, a place in which each plant fulfills its potential in a way that benefits the whole. I saw her careful cultivation in the time and energy she spent on the members of her dojo. I was with her for ten days, and she spent several hours at cafés with me, just talking about life in general and Aikido in particular. She invited me to her home along with a group of key dojo members, where she fed everyone and listened carefully to their ideas and suggestions. Of course, my description makes her sound like some benevolent mother figure, which is not the case. On the contrary, she is a warrior who constantly pushes the people around her to do better. It is this incredible combination of strength and the ability to nurture that—in my opinion—is what makes her community so strong.

But the truth is, as much as I learned from Yoko Sensei, my trip to Japan was not about her. It was about self-discovery, as trite as that sounds. I learned that I am capable of navigating a foreign bus system even in a different language, with a terrible sense of direction, and no street signs. I found I was able to cook an amazing peanut butter brownie even when the only peanut butter I could find turned out to be an interesting type of peanut flavored jelly. I learned I could train until my feet bled. Then I put Band-Aids on my scrapes and got right back to training. I got to know complete strangers and made some life-long friends. In short, I travelled. And I have come back slightly surer of myself, with a new perspective on leadership, greater appreciation for community, and some amazing memories.