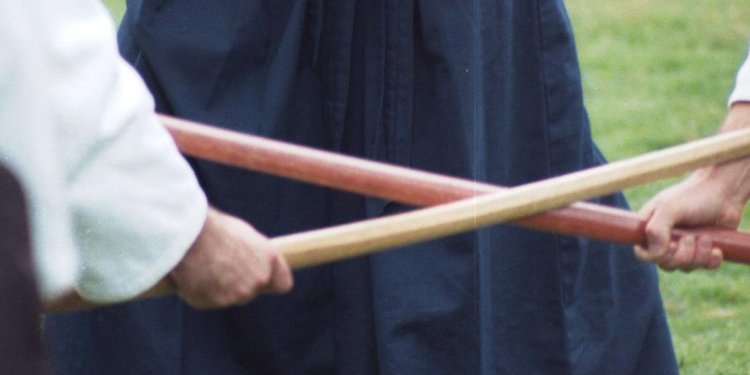 Some dojo hold classes which are devoted almost exclusively to training with to jo (staff), tanto (knife), and bokken (sword); the three principal weapons used in aikido. However, since the goal of aikido is not primarily to learn how to use weapons, trainees are advised to attend a minimum of two non-weapons classes per week if they plan to attend weapons classes.

There are several reasons for weapons training in aikido. First, many aikido movements are derived from classical weapons arts. There is thus a historical rationale for learning weapons movements. For example, all striking attacks in aikido are derived from sword strikes. Because of this, empty-handed striking techniques in aikido appear very inefficient and lacking in speed and power, especially if one has trained in a striking art such as karate or boxing.

Second, weapons training is helpful for learning proper ma ai, or distancing. Repeatedly moving in and out of the striking range of a weapon fosters an intuitive sense of distance and timing - something which is crucial to empty-hand training as well.

Third, many advanced aikido techniques involve defenses against weapons. In order to ensure that such techniques can be practiced safely, it is important for students to know how to attack properly with weapons, and to defend against such attacks.

Fourth, there are often important principles of aikido movement and technique that may be profitably demonstrated by the use of weapons.

Fifth, training in weapons kata is a way of facilitating understanding of general principles of aikido movement.

Sixth, weapons training can add an element of intensity to aikido practice, especially in practicing defenses against weapons attacks.

Seventh, training with weapons provides aikidoka with an opportunity to develop a kind of responsiveness and sensitivity to the movements and actions of others within a format that is usually highly structured. In addition, it is often easier to discard competitive mindsets when engaged in weapons training, making it easier to focus on cognitive development.