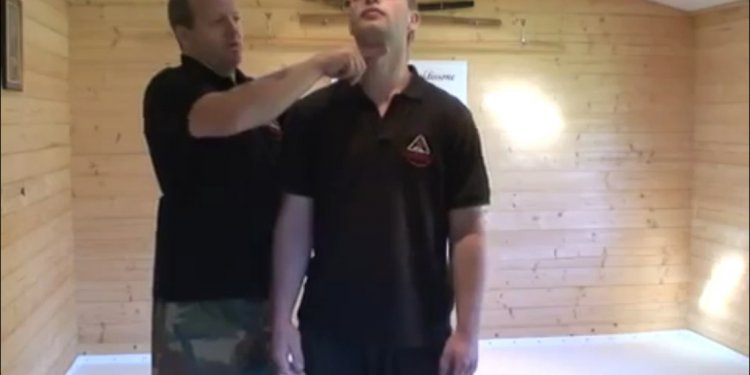 Aikido is an incredible martial art with awesome self defense theories and applications. Unfortunately, many functional self defense and martial arts practitioners have overlooked aikido and consider it to be ineffective, primarily due to unrealistic training in a majority of schools. But doing so is a mistake. With realistic training, the unique principles and techniques of aikido can work extremely well. On this page I'll explain the theory of aikido, how to train it realistically, and demonstrate functional applications in pictures and video.

Aikido begins before a physical attack has been launched, with an active awareness of distance and position. The ideal distance or ma-ai is one at which your attacker must take at least one step in order to touch you. This distance necessarily requires a motion of convergence for an attack to be executed, and that motion of convergence is a movement of energy toward you. Aikido works by blending with or 'stealing' that energy from your attacker, and redirecting and/or reversing it into a throw or lock.

The theory is awesome, and in theory it's not incredibly complex. In practice however, especially in the face of a real attack, it's harder than it may seem to apply many common entries used to gain initial control. If an attacker succeeds in getting close by concealing his intention, the motion of convergence will have already occurred. And if the attack involves a hard, fast, violent flurry of multiple blows, it can be incredibly difficult to blend into it or 'get a handle' on the opponent in order to redirect or reverse the attack. The same difficulty also applies when skilled and unskilled opponents use fakes to set up their attack, or grabbing attacks that involve violent pulling and pushing, as most grabbing attacks obviously will.

When an attack is initiated at close range and/or isn't singularly committed in nature, establishing the initial control required to redirect or reverse the energy of the attack may require more than a harmonious merge or blend. It may require a direct and forceful entry to take control rather than steal it, along with the use of force to lead an opponent into a throw or lock.

Although this more direct and aggressive approach isn't common in many, if not most aikido schools, it does follow the principles of the art. The same centered base (physical and mental), unique footwork, and circular application of power are of great importance.

One of the primary goals of aikido is to enable a practitioner to defend themselves without injuring their opponent. Aikido thus uses throws, joint locks, and pins instead of strikes. However, the reason aikido practitioners are not injured in practice is their skill in falling and rolling out of these techniques. The average attacker will not know how to fall or roll, and could be severally injured by aikido throws and locks. In fact, these techniques can do more lasting damage than many strikes. Being thrown onto concrete can lead to accidental death due to head trauma, and joint manipulations can lead to torn ligaments and tendons that destroy a joint for life.

Aikido throws can be used to 'gently' throw an opponent to the ground, and joint manipulations can stop at locks instead of progressing to breaks. But care must be taken when using such techniques on the average person, unless the goal is indeed to injure them.

Keep in mind that defending yourself without injuring your opponent is generally more difficult than defending yourself by injuring him. It requires a higher level of skill, and if your opponent is not injured he may very well continue his attack after your initial defense. However, there are situations where it may be unwise or unethical to injure your attacker, and aikido provides a way to do this.

Judo VS Aikido Self Defense