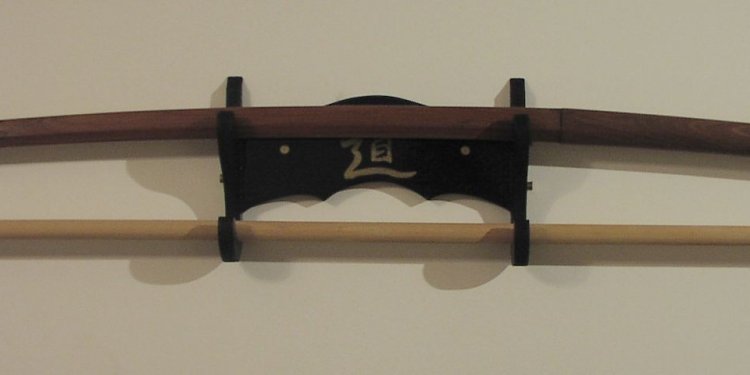 Although I have not practiced aikido, I have some experience in kendo and can tentatively offer an answer.

In the school I was in, we used to practice a multitude of suburi (sword swings). In most of them, the jodan-no-kamae stance is assumed prior to striking. This sounds a lot like the stance your teacher is using. In this stance, your sword is placed in the optimal position for a downward slash, gaining speed and power from gravity as well as angular momentum, while at the same time minimizing your own expenditure of energy. It's basically the most cost-efficient stance for downward cuts.

However, in some suburi, we would send the shinai or bokken all the way back so it becomes, as you mentionned, aligned with the spine. This cutting technique is not meant to be used in an actual fight, as it is much slower. Indeed, "charging up" your cut this way means doubling the distance your sword needs to travel prior to the cut, as well as necessitating a lot more muscle energy on your part to get the sword back up. And that's exactly why it's a good practice swing. It's basically weight training, using the weight of your sword as a resistance while practicing proper swing control at the same time.

The suburi used in kendo and aikido are probably different, but it seems to me that this could be a possible explanation for your observations. Your teacher's preferences may influence his selection of suburi for his class so that you see some more than others but, by themselves, both are proper exercises. They simply have different goals.