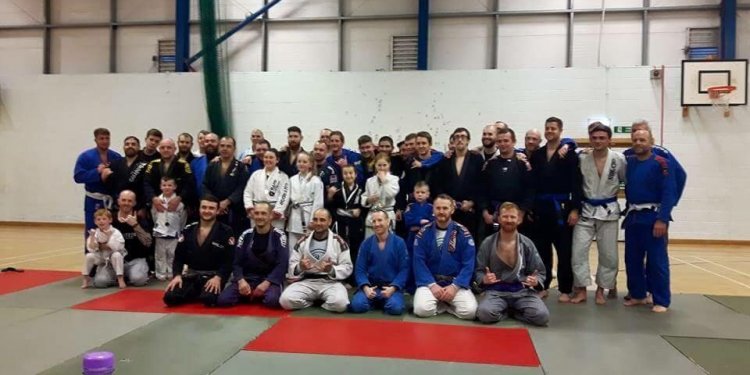 Where did Jujitsu originate from?

"As to the origin and native land of Ju Jutsu, there are several opinions, but they are found to be mere assumptions based on narratives relating to the founding of certain schools, or some incidental records or illustrations found in the ancient manuscripts not only in Japan but in China, Persia, Germany, and Egypt. There is no record by which the origins of Ju Jutsu can be definitely established. It would, however, be rational to assume that ever since the creation, with the instinct of self-preservation, man has had to fight for existence, and was inspired to develop an art or skill to implement the body mechanism for this purpose. In such efforts, the development may have taken various courses according to the condition of life or tribal circumstance, but the object and mechanics of the body being common, the results could not have been so very different from each other. No doubt this is the reason for finding records relating to the practice of arts similar to Ju Jutsu in various parts of the world, and also for the lack of records of its origins."

Like many other subjects of history, it would be impossible to accurately describe the origin of Jiu-Jitsu. However there is no lack of hypotheses. Every culture has shown to have some form of hand-to-hand combat in its history. Weaponless combat usually appears in the form of wrestling and sometimes boxing. Looking at a fighting timeline, it is possible that the wrestling techniques of Jiu-Jitsu could have been influenced by Ancient Greece. The Olympic Games were one of the Greek's traditions. In fact one of its most popular sports, Pankration was a sport that involved both boxing and wrestling techniques and became more popular to the Greeks than each one of them individually. During Alexander the Great's conquests (356 - 323 B.C.), he brought the Greek culture to the areas he conquered. His conquests stretched all the way to India, where he introduced the customs and ideals of Greek culture to the people of that area where Jiu-Jitsu's foundation was likely to have been born.

The general idea embraced by most historians is that systemized martial arts techniques came from India along with Buddhism (Dharma). The concept here is that the Shaolin temple was built in the center of China and this is where Dharma introduced Buddhism and Boxing. Buddhist Monks in northern India are said to have greatly contributed to the early development of Jiu-Jitsu. Bandits constantly assaulted the monks during their long journeys through the interior of India. Buddhist religious and moral values did not encourage the use of weapons so they were forced to develop an empty hand system of self-defense.

These Monks were men of great wisdom who possessed a perfect knowledge of the human body. Consequently, they applied laws of physics such as leverage, momentum, balance, center of gravity, friction, weight transmission and manipulation of the human anatomy’s vital points in order to create a scientific art of self-defense.

Another version supports the idea of Jiu-Jitsu coming from China around the time of the fall of the Ming Dynasty. When a Chinese monk named Chin Gen Pinh came to Japan, accompanied with his knowledge and experience of Kempo, known as the “China Hand.” Another theory says that there were practitioners of Chikura Karube, a wrestling sport developed around 200 B.C. It is said that Chikura Karube later became Jiu-jitsu in Japan.

One thing is certain about these stories, and that is that the Japanese were responsible for refining a grappling art into a very sophisticated grappling system called Jiu-Jitsu which was developed in Japan during the Feudal period.

THE ART OF THE SAMURAI

The period of Japanese history between the 8th and 16th centuries was covered with constant civil war and many systems of Jiu-Jitsu were utilized, practiced and perfected on the battlefield. This training was used to conquer armored and armed opponents.

It was originally an art designed for warfare, but after the abolition of the Feudal system in Japan, certain modifications needed to be made to the art in order to make it suitable for practice. During Feudal times, Jiu-Jitsu was also known as Yawara, Hakuda, Kogusoko, and an assortment of other names.

The earliest recorded use of the word "Jiu-Jitsu" happens in 1532 and is coined by Hisamori Tenenuchi when he officially established the first school of Jiu-Jitsu in Japan. The history of the art during this time is uncertain because teachers kept everything secret to give their art a feeling of importance and then would change the stories of their art to suit their own needs.

In approximately 1603, Japan came to a fairly peaceful period following the formation of the Tokugawa military government by Tokugawa Ieyasu. During this time (1603-1868), the feudal civil wars that had plagued Japan for centuries started to disappear. However, following the adage "living in peace, but remembering war, " the traditions of classical budo (martial arts) required that everyone should learn a method of self-defense for those situations where weapons could not be used and the practice of Jiu-Jitsu continued to spread. Forms and techniques displaying weapons skills of fighting began to yield to weaponless styles which incorporated many of the grappling ground fighting techniques of the older styles.

After the Feudal period in Japan ended (Jiu-Jitsu was no longer needed on the battlefield), a way to practice the art realistically was needed, which is why Jigoro Kano (1860-1938), an educated man and member of the Cultural department and a practitioner of Jiu-Jitsu, developed his own version of Jiu-Jitsu in the late 1800s, called Judo. Judo was helpful because it allowed practitioners the ability to try the art safely and realistically at the same time.

After a match-up between older styles of Jiu-Jitsu and Judo at the Tokyo police headquarters, Judo was named the national martial art in Japan. It was the official art used by law enforcement in the late 1800s, and continues to be popular to this day.