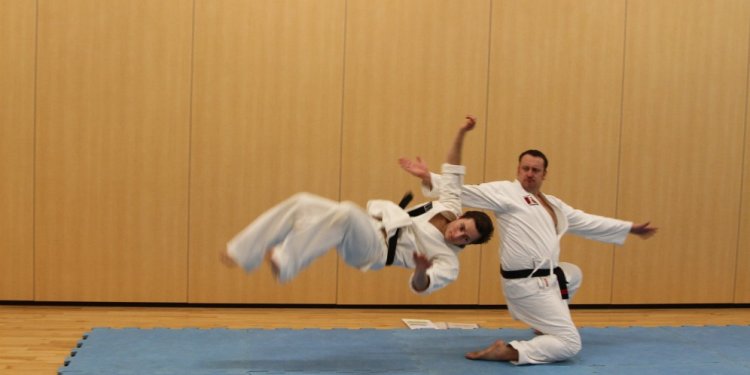 Most martial arts differ in the emphasis that they place on various techniques.

An over-simplified comparison with other martial arts would appear like:

A stand-up style with most emphasis on striking and kicking techniques.

Karate is in empty-hand combat system that originated in Japan. A stand-up style with most emphasis on striking and kicking techniques. Some styles have roots in Jujitsu and some styles contain a competitive or sportive element. It is largely a stand-up system that makes extensive use of striking and kicking movements similar to Taekwondo, but without as much emphasis on leaping or flying kicks. Karate is typically thought of as a "hard" system that employs powerful, linear movements and deep, strong stances. However, some styles prefer to blend some "soft" circular blocking techniques with strong, rapid counter-attacks. Strengthening the body and breaking boards with the hands and feet are also a common practice in this style.

A stand up style with most emphasis on acrobatic kicking techniques, a partial art with strong sportive or competitive elements.

An Olympic sport since 2000, Taekwondo is an empty-hand combat system that originated in Korea and makes acrobatic use of the whole body. Tae means "to Kick" or "Smash with the feet"; Kwon implies "punching" or "destroying with the hand or fist", and Do means "way" or "method". It is primarily a kicking art fought at long range, where the defender keeps opponents away through the use of actions using the hands and feet. Strengthening the body and breaking boards with the hands and feet is a common practice in this style. Modern Taekwondo is highly organized and has expanded its martial art origins to become a popular "martial sport" that employs competitive sparring and tournaments.

A grappling style with most emphasis on throwing and grappling.

Directly descended from Jujitsu; a martial art with a strong sportive or competitive element (an Olympic sport). The fundamental principle of Jujitsu is to avoid an enemy's superior strength and then make efficient use of that strength to the enemy's disadvantage. Historically a problem with jujitsu was the fact that it was strictly a combative style and a contest could only be decided by the death or crippling of one of the contestants. In 1882, Dr Jigoro Kano devised a way of moulding this deadly art into a sport. He modified or eliminated the most dangerous of the Jujitsu techniques and created Judo, which could be practiced for competition or just for good physical conditioning. Judo is often referred to as "the gentle way", because the objective is the accomplishment of a goal with maximum efficiency and minumum effort. Judo has been an Olympic sport for men since the 1964 Tokyo Olympics and for women since the 1988 Seoul, Korea Olympics.

A stand-up style with emphasis on joint locking and throwing techniques.

Directly descended from Jujitsu and primarily a non-competitive martial art. The roots of Aikido link to several styles of jujitsu, in particular "daito-ryu" or "aiki-jujitsu", in addition to various sword and spear fighting arts. Generally speaking, Aikido could be described as Jujitsu's joint locks and throws combined with the body movements of sword and spear fighting. This is an oversimplification however, as Aikido has established a reputation as an art of great technical and spiritual depth. Physically speaking, Aikido techniques are very flowing and graceful, with an emphasis on unbalancing and controlling an attacker through a combination of timing and the subtle manipulation of the body and its limbs.

A comprehensive martial art with emphasis on strikes, joint locks and throws as well as a wide variety of weapons and techniques of stealth; a martial art with no sportive or competitive element.

Ninjitsu (sometimes spelled "Ninjutsu") techniques are very closely related to those of Jujitsu. The major difference being that Ninjitsu places greater emphasis on a complete concept of self-protection in the physical, mental, and spiritual sense. The way of the ninja is to endure, survive and prevail over all forms of threat or danger through the use of any and all means possible. Accordingly, Ninjitsu is famous for its use of a wide assortment of exotic weapons; from razor-edged throwing stars (shuriken) and blinding powders, to extensive training in the techniques of stealth and deception. It is more than a physical combat system and deeper in meaning than the simple out-witting of an enemy; Ninjitsu is the way of defending against all forms of threat while perfecting the self and making the world a better place. The skill of the ninja is, to put it simply, the art of winning.

A comprehensive martial art similar to, and with roots in, Jujitsu. Combat and self-defense oriented martial art with no sportive or competitive elements.

Hapkido is a Korean martial art, whose name means "the way of coordinated power". Translated, Hap means "coordination" or "harmony", Ki means "power", and Do means "the art" or "the way". The techniques of Hapkido are very similar to Jujitsu in their style and breadth (plenty of joint locking and throwing techniques), except perhaps for a greater emphasis on kicking techniques (similar to the other famous Korean martial art of Taekwondo). The purpose of Hapkido is to act as a system of practical self-defense, so it has not evolved or incorporated a sportive aspect in the manner of Taekwondo. The style is predominately defensive, but promotes a rapid, complete and decisive response once attacked.

Another comprehensive martial art with some roots in Jujitsu and a strong influence upon the art of Karate.

Kempo is a comprehensive and varied martial art. Accordingly, many other arts will share some similarities. For example, Kempo employs some of the jumping and spinning kicks that are commonly seen in Taekwondo. Karate is probably the most similar art to Kempo because of similar evolutionary backgrounds. Is it believed by many that Karate originated as an offshoot of Kempo and 95% of all Karate techniques can be found in the Kempo system. Jujitsu contributed many immobilization and projection techniques to Kempo. Recently, some Aikido and Aikijutsu techniques have been incorporated into the art.

What is Sport Karate?