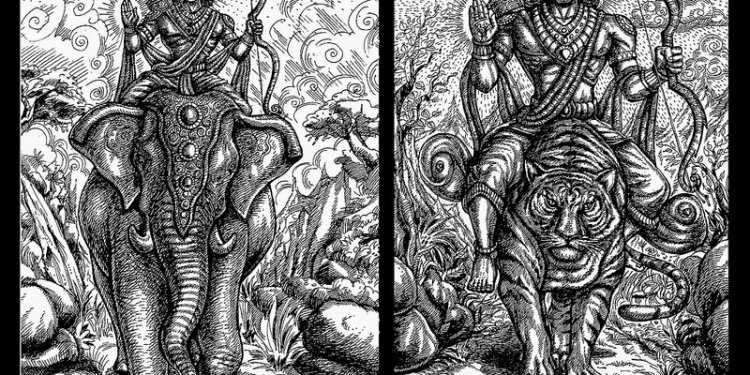 Origin of the word martial

Marshal and martial are a pair of words that, perhaps aided by similar associations, are often confused.

The first image that Marshal provokes in one’s mind, at least for Americans, is likely a lawman of the Old West, but the word’s origin is hundreds of years older. The term comes from a Germanic compound meaning “horse servant.” (The first word in the compound shares its etymology with mare, the word for a female horse.)

From this humble beginning, the word was later associated with the leader of a medieval nobleman’s cavalry and later became a military rank equivalent to general. (It is this meaning that speakers of British English are more familiar with, because this military rank persists in the United Kingdom and in countries with military traditions inspired by that country.)

It was then adapted to civilian usage as a law-enforcement position, so that now, in addition to your run-of-the-mill federal marshals, there are fire marshals, who enforce fire-prevention ordinances, and air marshals — informally also referred to as sky marshals — who provide security on commercial passenger airplanes. (The latter terms became much more ubiquitous after the 9/11 terrorist attacks, when their numbers were increased significantly.) “Air marshal” is also a high military rank in certain air forces.

In addition, the equivalent of a police chief in a large military unit is known as a provost marshal; the first word in that title, borrowed from French (and originally from Latin), is pronounced “PRO-vo.”

Marshal is also sometimes used to identify a person in charge of a ceremonial event, though it appears more often modified to “grand marshal, ” indicating the honorary leader of a parade. It is also a verb that means “to lead” or “to organize, ” as in “The general marshaled his forces.” (Note that the preferred spelling for the past tense and other inflections is with a single .)

Marshal, influenced by the occupational surname Marshall (from an obsolete spelling), is often incorrectly spelled like the name.

Like Marshal, martial has a belligerent background: It stems from the Latin word martialis, meaning “pertaining to Mars.” That Roman god, borrowed from the ancient Greeks’ similar god Ares (not to be confused with name of the Zodiac sign Aries, from the Latin word for ram), was the god of war, though he also had protective aspects lacking in his blindly bellicose Greek counterpart and was also an agricultural god. (He also gave his name to the third month of the year, the beginning of the season for both planting and campaigning.)

martial is used in the phrase “martial arts, ” referring to disciplines for hand-to-hand combat ranging from Brazil’s capoeira to Israel’s krav maga to more familiar Asian practices such as karate and judo.

It also modifies nouns in terms such as “martial law, ” referring to extreme measures put in place by a government in times of national emergency, and court-martial (hyphenated as a holdover from its French origins), which refers to a military trial or a court in which a panel of military personnel presides over such proceedings.

Subscribe to Receive our Articles and Exercises via Email