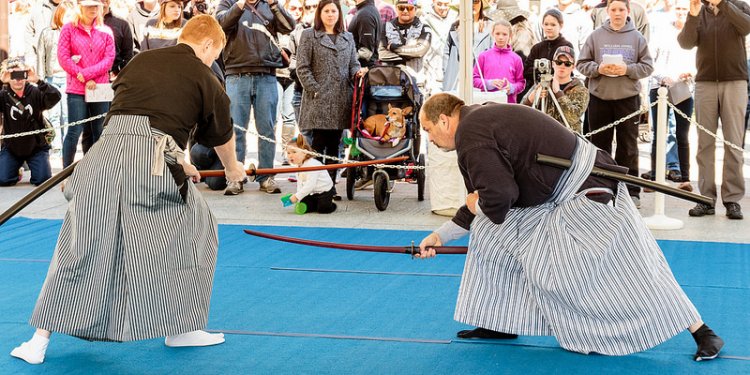 Kendo means "the way of the sword." Kendo is the sword art of the samurai or bushi. It is the highly ritualized practice and formal art of Japanese swordsmanship that emerged over a thousand years ago.

Kendo today is practiced using bamboo swords called "shinai." To practice kendo "bogu" or protective armor must be worn to prevent injury. To score a point in kendo is to strike your opponent with a perfectly timed strike using your entire mind and body unified at the moment of contact finishing by following through to a ready position. On the surface we see that kendo involves striking an opponent with a bamboo sword to score a point, but it takes a lifetime to master everything you need to master in kendo both physically and mentally. Kendo practice begins and ends with courtesy, manners and strict Japanese etiquette. The entire practice session is intense and physically demanding, a hallmark of traditional samurai training that is still used in kendo today. Kendo requires complete awareness, concentration and split second reflexes. Much of kendo training is about doing repetitive strikes hundreds of times during each training session.

Kendo has been a part of Japanese culture for a large part of its history and continues today as a sport in Japan and throughout the world. The history of kendo is the history of the Japanese sword, its technical development and its cultural meaning.

- Then the first Japanese forged swords called shinogi was created during 794-1184.

- The quality of both swords and sword technique were improved throughout the samurai era of 1200-1573.

- During 1603-1867 was the relatively peaceful time called Edo era. This is the time when the goal of kendo changed from of "destroying the enemy" to a goal of character development, moral and social justice.

- After World War II kendo was temporarily prohibited, however it was reestablished in 1955. Since then it is adapted as part of the Japanese Physical Education school curriculum, and part of Japanese police training.

The Purpose of Kendo Training

In kendo training, young children learn the kendo fundamentals. The main objective of long-term kendo training is to develop a youngster into an adult who will be an asset to the community. The requirements for becoming a good citizen are to have a strong, healthy body, a sound and good character, mental fortitude, understanding of compassion and cooperation, and an ability to cope with the rigors and adversities of life. Proper and diligent kendo training will nurture these qualities.

Also, the overall goal of kendo training according to the All-Japan Kendo Federation is to mold the mind and body, cultivate a vigorous spirit through correct and a rigorous training, strive for improvement in the art of kendo, hold others in esteem courtesy and honor, associate with others with sincerity, and forever pursue the cultivation of self, as well as to develop the ability to observe, analyze, understand, and promptly cope with any situation without fear, doubt, or surprise. Thus, one will be able to love his country and society, contribute to the development of culture, and to promote peace and prosperity among all people.