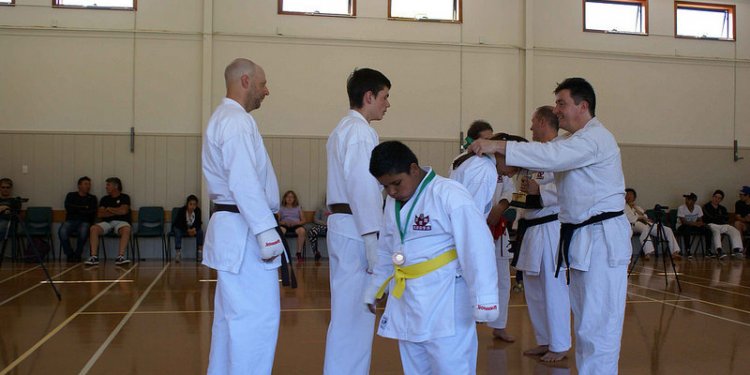 Many people think of Judo and Taekwondo as sports because they are included along with other major sports in Olympic competition. Boxing, wrestling, Judo, taekwondo, and kickboxing are examples of martial sports. I often hear martial artists who use the term "sport" as if referring to a game with no usefulness. The implication is that a sport is only for "play" and cannot be effective for self defense, fighting or combat. Many martial artists think that the distinction between sport and martial art is that martial artists train for real life.

Actually the distinction is more complex and rather surprising. In discussing it I will make generalizations that may not apply to the way you train in your sport or martial art. However I hope to give you a new way to look at the potential value of sports principles for martial arts training.

One of the primary differences between martial sports and arts is in the value of the training methods. Because of their alleged danger or lethality, many martial arts engage in artificial and even counter-productive training which involves "pulling" techniques, modifying the point of contact, and adding in a precautionary element of movement that, rather than training the body, can inhibit its natural action and the ultimate conclusion of a technique. Slow, careful, non-contact training is not an effective approach to prepare for actual fighting situations that require the opposite reactions. Typifying this approach is a student who falsely equates the ability to break boards with the ability to punch a person in the face. As another example, I have never seen realistic training in throat strikes or eye gouges in any martial arts class, even though these are often recommended for self defense. The teaching generally done for these techniques helps students to understand what to do, but does not provide effective results for fast, reflexive and accurate application of these techniques against an unwilling opponent in real life combat.

Sport, by removing some of the potential dangers, achieves the opposite. That is, sport more typically produces natural, fast, reflexive movement with full power application, achieving a result against a struggling opponent who is also utilizing full power while engaging in strategic and tactical resistance using all of his or her resources and training. Techniques that don't work are soon abandoned, and successful skills are honed against different attackers under a variety of conditions. Maintaining control in various combat situations, both in attack and defense, is difficult when faced with the unpredictable nature of an opponent's efforts, but facing these situations in contest prepares you for similar situations. Each opponent in competition is operating at the limit of physical and psychological skill. By pushing that limit contestants are continually realizing and expanding their potential.

Sometimes the "combat" arts substitute intellectual perception, a highly subjective and deceptive frame of reference, for genuine training of the body and mind. Some martial arts don't train effectively for self defense and combat because they can't train for combat without severe risk to training partners. Many martial arts have instead adopted highly stylized, ritualistic, and even dysfunctional training methods. Ironically, martial sports may provide the superior training in effective combat techniques because martial arts can't be practiced in a real life way without injury.

In martial sports, one purpose of competition is to take the place of the older shinken shobu (life-and-death fights) in developing technique, knowledge, and character. You never see yourself so clearly as when you face your own death. Competition can provide a safe, controlled glimpse at this kind of defeat. Fighting spirit can be developed only through fighting. Surely it is not the same as the battlefield, but it serves a similar purpose, and it is closer to a combat situation than any other form of training.

Of course this can go wrong. Winning and losing can become too important and start to pervert the training process. The ultimate goal should not be the winning of medals. Using sport competition as a metaphor for real fighting can be quite different from playing it as a game. Matches, along with free practice and sparring, are simply different methods for training the mind and body to deal with the adversity of fighting situations.

Just as non-competitive martial arts training may not provide the benefits of competition, training for sport competition may not provide the full scope of self defense training. Martial sports often include non-competitive components. For example, competition is only a part of the Judo curriculum, and Jigoro Kano, the founder of Judo, was very concerned about preserving those self defense techniques that could not be used with full force in competition. However, Judo remains a remarkably effective self defense training, even after the development of other modern "combat" methods, and even when Judo is practiced today largely as a sport. Jigoro Kano applied modern sport training methodology to the traditional koryu jujutsu and found that it produced a better combat art, which has proven itself again and again over the last 120 years.