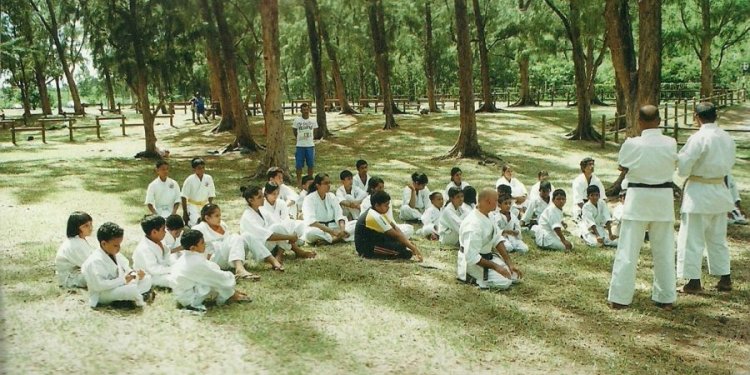 (photo borrowed from okkb webpage)
Nothing better to do than dress up and make a spectical of yourself?

After thirty-years, I stopped travelling to Okinawa in 2013. My sensei had passed away in December 1999, but I continued to visit the island. I still had many sempai and friends there, and besides, I love the food, music, and the geography of the place. But after each visit following my teacher's death, I left the island wondering why I was still going. In retrospect, I can see that my karate was continually pulled and pushed by internal dojo politics, but that wasn't the only thing causing me to question why Okinawa was becoming less relevant to me.

For some years I'd been witnessing, often at close hand, the corrosive effect of fame and fortune on the Okinawan karate community. I watched the emergence of a generation of instructors who began to revel in the adulation being pored on them by foreigners, who were now arriving on the island by the bus load. Instructors started to abandoned the morality of their cultural heritage in favour of big money, while explaining their behavior as merely the latest 'adaptation' to the foreign forces being brought to bear on them. Being shallow and greedy is hardly a great adaptation to make in my book, but then I could give flying-fig for the stuff these guys are chasing.

(photo borrowed from okkb webpage)
Aren't these the same people who are on the new stamps?

Just to be clear, in Okinawa today, many senior karate instructors spend their time trying to get themselves into the Guinness Book of Records, and their images on postage stamps. This may seem like a great thing to do, to spread the word about karate to the world, but does anyone really believe there is anywhere in the world today that hasn't already heard of it? Bruce Lee solved that problem over forty-years ago! Besides, it's abundantly clear, that the more karate has been spread, the thinner it has become. Until today, where the lazy, the unfit, and the misguided...all call themselves 'karateka'.

In the meantime, back in Okinawa, the current crop of karate 'masters' continue to thrive. But it's interesting to note, that on their watch, big money sport-karate is welcomed with open arms. On their watch, exclusive deals are done with a foreign magazine publisher to splash their images all over the front cover and make them famous. On their watch, anyone can walk in through the dojo door, lay their money down, and get a photo at the end of it. On their watch, you can book a karate holiday and have them turn up to teach you (something?). On their watch, promotions are handed out like invitations to a party; and on their watch, so long as you 'play the game', they happily tolerate you.

New karate stamps - another point of sale in the marketing of (particular) instructors?

Karate in Okinawa may not be dead, but I believe it is mortally (or should that be morally?) wounded. Through my work, I've spent time with many of the 'masters' in these photos. To their adoring fans they can do no wrong, but to someone outside the fold they often adopted a different persona; a change of character that initially left me shocked, but sadly, I got use to! I've never believed bragging was a good thing, nor was I ever impressed by the things they told me 'off the record', after asking me to stop recording. If anything, I felt embarrassed to be in the situation I was, listening to their 'secrets'.

There is an argument to be made that whatever Okinawan karate teachers can do to promote the art is okay, well I don't see it that way. The example being set by many prominent Okinawan practitioners of karate today leaves a lot to be desired in my view. They will no doubt get their vain wish to be remembered, but it won't be in the same way previous generations of karateka are remembered. Being known is one thing, what you're known for is something else. All of these karate instructors could have said no when asked to lend their image to such shabby and shallow marketing.but they didn't.