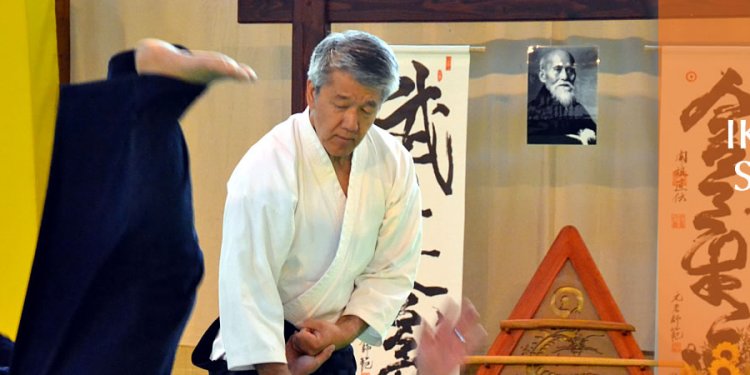 Mitsugi Saotome Shihan is the Founder and supervisory instructor for more than 100 affiliated Dojos of the international Aikido Schools of Ueshiba association.

Master Saotome has devoted his entire adult life to the study and teaching of Aikido. He began as a special apprentice with the Founder of Aikido, Ueshiba Morihei (O Sensei) in 1955 and continued for 15 years until the Founder’s death in April of 1969.

From 1960 until 1975 Master Saotome taught at the World Aikido Headquarters in Tokyo, Japan. During this period he was accorded many positions, honors and achievements. He appeared publicly at many events in Japan and abroad for the purpose of spreading the understanding and knowledge of Aikido.

In 1975 Master Saotome decided to leave his highly respected position as a senior instructor at World Aikido Headquarters in Tokyo to come to the United States. When asked about his decision to leave the home of his birth he responded:

“The eyes of the world are on the United States. This country is a great experiment; a melting pot of people from many different cultural backgrounds living together, the world condensed into one nation. The goal of Aikido and O Sensei’s dream is that all the peoples of the world live together as one family, in harmony with each other and their environment. The United States has the opportunity to set a great example.”

In addition to regularly scheduled national and international seminars, Master Saotome has taught many special seminars including a U.S. Military Special Forces seminar, special training of the U.S. Security Forces in Washington, D.C. and has spoken before the United Nations General Assembly on the role of Aikido in world peace efforts.

Master Saotome has published a number of highly respected books on Aikido including, and . He has also authored several training videotapes.