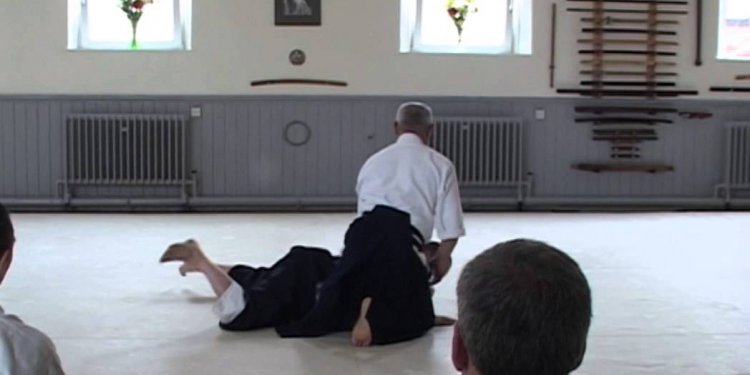 Did you commence Aikido training at once?

No, I was not allowed to practice straight away. I had to clean the dojo and all the other rooms at Hombu, plus wash, do cleaning, shopping, administration and look after all the Master's family. Also I had to work in the fields. Eventually I was allowed to first watch the classes and then, after some time, to train. No one taught me at first I had to learn for myself. Fortunately I could already make ukemi (break falls)so I was all right. I decided to make my best endeavors to be a good uchideshi to O Sensei, and learn all that I could from him. It was the greatest time of my life! I remember that O Sensei always had a strong presence... There was a very special atmosphere when he was around. This came from his physical posture - the way he sat, the way he walked, the way he moved around was so beautiful. Never could I see any opening in O Sensei's posture . . . not ever. His eyes were almost golden, not black as is usual with Japanese people.

Your time as an uchideshi must have been rigorous.

In one sense it was like a battle field. We rose every day very early to both work and train, and many nights I had to stay up late to wait for Waka Sensei (O Sensei's son, Kisshomaru - the present Doshu, or leader of Aikido) to return from his office work. It was so hard and intensive that many times I came close to a nervous breakdown. I used to see strange things: every night a ghost used to come to me. I don't know whether it was supposed to be a man or a woman. At that time I did not realize how close I was to a breakdown but now I realize of course. Just before I fell asleep each night it would come to me it was really frightening. I could sense its presence. Then all of a sudden it would become like a ton weight on top of me and I would not be able to move. Eventually I found a solution to this. I took my bokken to bed with me and as soon as I felt it's presence I held my bokken strongly . . . and then it was OK. This was due to exhaustion I think.

Many years ago you told me about your first meeting with Tamura Sensei, could you repeat it please for the readers of 'Fighting Arts'.

Well, it was one day after class and some of the students were doing Judo randori (practice fighting) on the mat. I was standing in the corridor watching this and one of them invited me to join in, which I did. I was surprised at how weak they were, and I repeatedly threw one man who was Sandan (3rd degree Black Belt) in both Judo and Aikido. So the master, Tamura Sensei called me over and invited me to practice with him. Then 'bang', Tamura Sensei struck me hard in the belly. I learned a lot from that, it was a good lesson in awareness, distance and posture for me. I believe that Tamura Sensei is one of O Sensei's greatest students. I learned a great deal from him in the past.

Anyone else that you would like to talk about . . . perhaps Saito Sensei?

Yes, he is a great Master. Every time he visits the United States I invite him to teach at my dojo. Saito Sensei was a special disciple of O Sensei. He stayed with him after the war to take care of him and manage the farm at Iwama Dojo. I have seen the kind of responsibility that he carried, and nobody could have done it as well as did Saito Sensei. I really appreciate Saito Sensei's work.

The teacher directly responsible for my training was Kisshomaru Ueshiba Sensei. O Sensei had already retired to the mountainside of Iwama, and only came to Hombu Dojo occasionally. The growth and development of modern Aikido since the war has been due to Doshu's hard work. His Aikido is very beautiful.