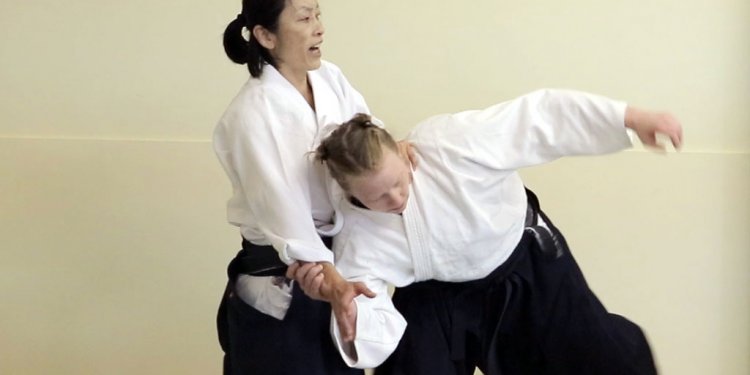 I’ll always remember the scene as I called at Sensei’s door to share with him my new discovery. To my surprise, he had never seen or heard mention of the book before. He put on his reading glasses and leafed through the manual, his eyes scanning the technical sequences intently. I felt compelled then and there to apologize to him for having ever doubted his assertion that he was making every effort to faithfully preserve the Founder’s techniques. Saito Sensei laughed and, obviously with great pleasure, bellowed, “See, I told you so!” From that time on (about 1979) even up through this day, Saito Sensei always travels to his aikido seminars with a copy of Budo to use as proof to show that a particular technique originated in the Founder’s teachings.

It goes without saying that I was forced to admit that there was at least one instructor who was disseminating aikido in a manner faithful to the original teachings of the Founder. But did this disprove my general theory that the styles of aikido widely practiced today have little to do technically and philosophically with the art of the Founder? Consider the following. If you go to the dojos of any of the major teachers, you will find that their students’ movements closely resemble the teacher in question. Let’s face it, they would be poor students if they did not make every effort to emulate their teacher’s movements. It is often possible to identify students of a given teacher in the context of a large demonstration in which participants from many different dojos appear. Why is it then that there is a such a vast difference among the major styles of aikido if all of the shihan studied directly under the Founder?

Some have said that the Founder’s art changed greatly over the years and that this accounts for the differences in the techniques of his students who learned during different periods. Others state that O-Sensei would teach different things to different students according to their character and ability. I have never found either of these arguments to be particularly persuasive. In fact, when I discovered the old 1935 Asahi News film many years ago I was surprised at how “modern” the Founder’s art was even at that early stage. Moreover, the Founder usually taught groups of students, not individuals, and this fact does not lend support to the theory that he adapted his instruction to the needs of individual students.

No, I believe there is a very different explanation for this considerable divergency of styles. I think it is due primarily to the fact that very few of O-Sensei’s students trained under him for any protracted length of time. With the exception of Yoichiro (Hoken) Inoue, a nephew of Ueshiba, Gozo Shioda, the Founder of Yoshinkan Aikido, and Tsutomu Yukawa, O-Sensei’s prewar uchideshi studied a maximum of perhaps five to six years. Certainly this was enough time to become proficient in the art, but not enough to master the vast technical repertoire of Aiki Budo with its many subtleties. Most of these vigorous young men who enrolled as uchideshi were forced to prematurely end their martial arts training to enter military service. Furthermore, only a handful of these early deshi resumed their practice after the war.

The same can be said of the postwar period. The initiates of that period include such well-known figures as Sadateru Arikawa, Hiroshi Tada, Seigo Yamaguchi, Shoji Nishio, Nobuyoshi Tamura, Yasuo Kobayashi, and later Yoshimitsu Yamada, Mitsunari Kanai, Kazuo Chiba, Seiichi Sugano, Mitsugi Saotome and various others. Shigenobu Okumura, Koichi Tohei, and Kisaburo Osawa form a somewhat unique group in that they practiced only briefly before the war, but achieved master status after World War II. None of these teachers spent any lengthy period studying directly under O- Sensei. This may seem like a shocking statement, but let’s look at the historical facts.

Before the war, Morihei Ueshiba used the Kobukan Dojo in Tokyo as his base, but was widely active in the Kansai area as well. In fact, he even had a house at one time in Osaka. Over the years it has become clear to me from listening to the testimonies of the oldtimers that the Founder moved around a great deal and would spend perhaps one to two weeks a month away from the Kobukan Dojo. Also, keep in mind that the early uchideshi ended up being coopted as instructors due to the burgeoning popularity of the art and the wide-ranging activities of the Omoto-sponsored Budo Senyokai (Society for the Promotion of Martial Arts) headed by Ueshiba. These pioneers studied for relatively short periods, had only limited exposure to the Founder because of his frequent absences from the dojo, and were themselves often away from the headquarters dojo functioning in a teaching capacity.