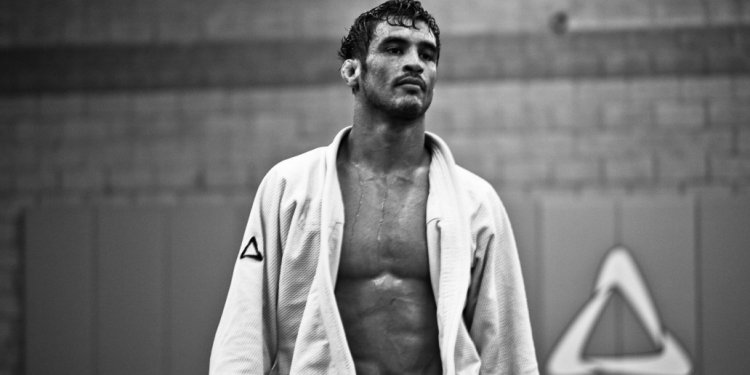 Chuck Norris was born in a log cabin that he built with his bare hands.* Now he lives at Lone Wolf Ranch, 1, 000 acres of rolling grassland on the fringes of the Hill Country, down from a cattle auction facility in Navasota. His rustic home is set behind a lake, with recovered-wood-beam ceilings and tasteful religious iconography accenting the walls. Near an in-ground pool, horses and steers graze. Out front is an iron gate mounted with security cameras, an American flag, and two howling wolf silhouettes. A couple dozen visitors stop by daily to catch a glimpse of the warrior tucked within.

Down the stairs he comes, modified mullet still damp from a midday shower, accompanied by his wife, Gena, and their two retrievers. The easiest way to determine Chuck Norris’s age is to cut him in half and count the rings, though if you ask politely, he’ll tell you he’s 76. The country’s most famous roundhouse kicker is still trim and compact, his eyes piercing blue, his teeth iridescent white.

Norris realizes his career path, from champion fighter to action star and celebrity pitchman, is as unlikely as it’s been lucrative. The Oklahoma native enlisted in the Air Force at 18, lost and lacking legitimate prospects. “I had a real strong self-image problem, ” he says. “I grew up in a broken family, in poverty, and I was very shy and unathletic.” It was during a tour in Korea that Norris first studied tae kwon do and found his calling: “The martial arts turned my life around.”

Five decades, nine Walker, Texas Ranger seasons, and 40 other screen credits later, Norris and his family are in what Gena calls “legacy-building mode.” How can they ensure that KickStart Kids, the Houston-based foundation Norris launched in 1990, survives once they’re both gone? Training at-risk Texas middle-schoolers in karate—8, 500 of them this school year—is a capital-intensive endeavor, and one they care about deeply. The solution, they hope, is 23, 000 years old, and buried beneath their backyard.

During a mild drought back in 2011, Chuck and Gena’s son-in-law Chris, their handy ranch foreman, decided to drill a few extra wells on the backend of Lone Wolf. On his third attempt, he nicked an aquifer deep under the soil. Nobody knew it was there. Water spewed 30 feet into the sky like black crude, immediately flooding their property, and their neighbor’s too. The pressurized rush wouldn’t stop, 168, 000 gallons coursing out over 24 hours. It took all of Chris’s technical know-how to cap it. Unbeknownst to everyone, the Norrises owned the rights to a natural bounty, and they had no clue what to do with it.

Soon they hired a hydrogeologist to run tests. He estimated it would take a drought hundreds of years long to drain their aquifer completely; the liquid bubbling below their feet, he explained, dated back to the last Ice Age, filtering through millennia-old volcanic rock and clay on its way up. It was some of the smoothest water he’d ever seen, anywhere in the world.

If you’re Chuck Norris, and you find a nearly unlimited source of amazing H2O yards from your bedroom, what’s your next step? You bottle it and sell it to your adoring fans.

Across the road from Chuck’s front gate now stands C-Force by Chuck Norris, a 43, 650-square-foot production center. It’s so new, the office upstairs doesn’t even have furniture yet on our visit. Down below, 15 employees are hard at work, loading forklifts and monitoring their state-of-the-art equipment, which molds bottles on site and fills 400 of them per minute. Engineers connected the source directly to the plant with 7, 000 feet of pipe, so the water is untouched by humans until it hits their lips. Gena controls 51 percent and runs the certified woman-owned operation. “From what we’ve been told, in this industry we are the talk of Texas, ” she says.

C-Force will hold a grand opening at the plant on January 10. By spring, it’ll be available in H-E-B, Albertson’s, and more than 1, 100 convenience stores all the way to the West Coast, with a chunk of the proceeds benefitting their foundation. The idea is to sell premium water at a “mid-premium price.”

In their kitchen, Chuck grabs a bottle of C-Force fresh off the line and pops its red cap. Chuck Norris can taste lies, so the liquid better be as “pure” and “powerful” as the sleek label claims. He takes a slug, pauses, and smiles.

Then he hikes up his boot-cut blue jeans and walks with Gena over to his personal gym, “my pride and joy.” It’s off the main house, a low-ceilinged room full of cardio equipment and free weights backed up against a barn-sized dojo, blue mats substituting for carpet. The family is fitness-obsessed; the couple’s 15-year-old fraternal twins are already second-degree black belts. When Chuck Norris exercises, the machine gets stronger.

Chuck and Gena are earnest, faithful people. In their eyes, everything they’ve experienced, from Chuck’s unexpected stardom to the Navasota discovery, was preordained. “A blessing, ” Gena says, “literally from God.” “What are the odds?” Chuck asks in the gym, dripping with folksy charm. “I mean, what are the odds!?”

He’s excited about the new company, and, together with his enterprising wife, will continue to spread the gospel of choke holds and self-esteem in Houston and beyond. There’s no guarantee their startup can wrestle away market share from established brands like Fiji and Evian, but it shouldn’t surprise anyone if it does, either.