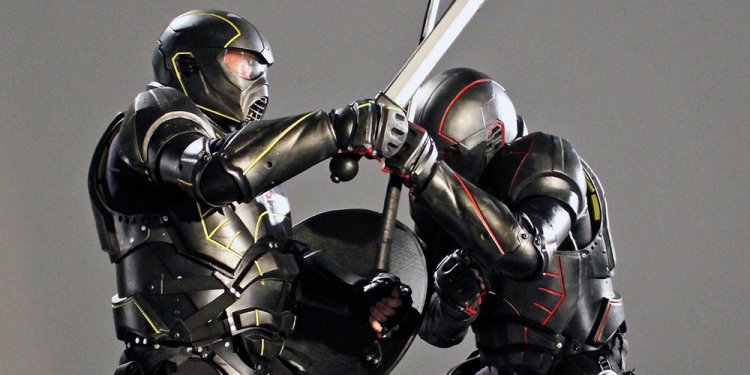 Watch out, UFC-a new kind of full-contact combat may be coming to television. The Australian company Chiron Global is developing a high-tech suit of armor that they think could revive interest in weapons-based martial arts.

Made of Kevlar and carbon fiber, among other things, Lorica armor is light enough to let athletes to move around, but strong enough to protect them from severe blows. Plus, it has 52 sensors embedded to measure the impact of each hit. The Economist suggests Lorica could portend a new kind of televised sport-a modernized, data-laden version of jousting, or an Iron Man-ified MMA.

You can watch some test fights in the video below. The sensors enable a Mortal Kombat-style health bar that adjusts based on where and how hard the player gets hit.

The sport, which the company is calling Unified Weapons Master (UWM), could come to America soon, writes the Economist:

A series of test fights using the system was staged in Wellington, New Zealand, in March. The first official fights, which are being branded as the Unified Weapons Master, will begin later this year in Australia, with competitions expanding to America in 2017.

And apparently several militaries are even interested in getting some of these suits for training purposes.

Lorica seems like it could be a useful training tool, though it has its limitations. Hand-to-hand fighting styles often target the joints, and this suit of armor, like others, is soft around the joints to allow for mobility. That rules those body parts out as targets. That's probably one reason why Chiron is focusing on stick and sword arts, which are more likely to go for the fleshy parts of the body.

Although the company is touting UWM as the most realistic way to practice your weapons skills, some sword schools frown upon the use of armor in practice. If you know that your opponents cannot hurt you, you're more likely to make reckless attacks that in reality would get you killed.

On the other hand, this could be a great way to put that old show Deadliest Warrior to the test and settle some age-old disputes.