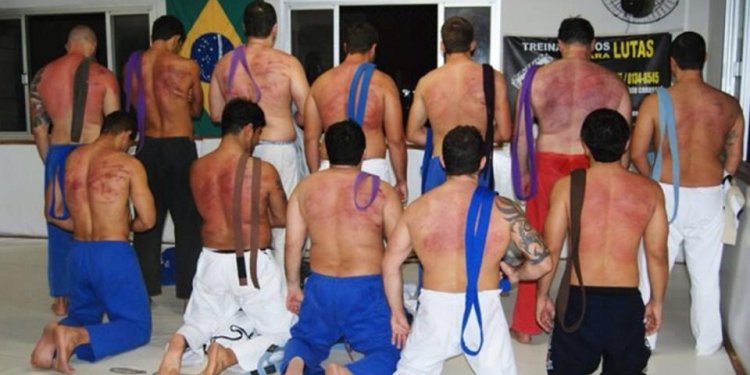 Jujitsu, like many other martial arts, uses a ranking system based on different colored belts. Each belt has a unique color and is used to represent the skill level of the student. Lower-level belts can typically be earned in a few months, whereas higher-level belts can take many years. The belt levels and colors in traditional jujitsu are similar to most other traditional martial arts, such as judo, karate and tae kwon do.

The white belt is the entry-level belt in jujitsu. It does not have to be earned like the other belts. The color white is used to symbolize purity.

The red belt is the second-level belt in jujitsu. It takes an average of two months of training to earn a red belt. You must be able to demonstrate the fundamental techniques of jujitsu to earn this belt. Jujitsu is one of the only martial arts to use the red belt in its ranking system without it being a substitute for the orange belt or as a rank higher than black.

The yellow belt is typically the second-level belt in most martial arts, but in jujitsu, it is the third. It can take about four to six months to earn a yellow belt, though it can be longer at some schools. You typically have to demonstrate more techniques to earn this belt than for a red belt.

The orange belt is the fourth-level belt in jujitsu. At this rank, you are still considered a beginner and have much to learn but are on your way to becoming an intermediate student.

The green belt is the fifth-level belt. This is the first intermediate belt. It can take one year up to several years to earn this belt, depending on the school and your learning pace. At this stage, you need to be able to demonstrate more complicated techniques than for your previous belts. The green belt is also the first level where you begin to focus more on throws and less on ground work.

The blue belt is the sixth-level belt in jujitsu and the second intermediate rank. You will continue to improve upon the skills you learned as a green belt, such as more advanced throws, escapes and engaging your opponent.