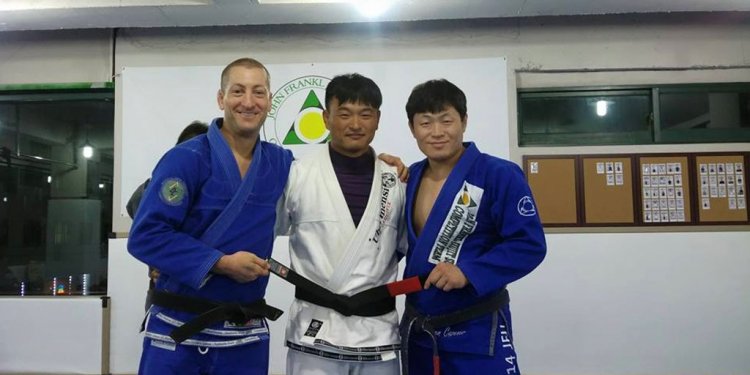 Jinho Park was born in Ha-dong, a very small rural town in Korea in 1972. From an early age he showed his interest in Martial arts, so started to learn Hapkido in 1983, which changed his whole life entirely and made him live a martial artist’s life. In 1990 he became a Hapkido teacher in his master’s dojo. At that time he also started to practice Taekwondo and even served his military duty as a Taekwondo instructor. In 2002 he started to run his own Hapkido dojo in Seoul and made lots of great students. While he was living his martial artist’s life faithfully, he happened to meet Brazilian Jiujitsu in the Hapkido Master seminar in 2006. It was his second turning point in his life. As soon as he got to know about Brazilian Jiujitsu, instantly he signed up for the Cobrinha instructor class in Korea and started to practice Jiujitsu in earnest. He got his blue belt in 2008, purple belt in 2010 and brown belt in 2013 in the Cobrinha Korea. In 2010 he made his own BJJ team, Respect in Korea and affiliated his team to the Clark Gracie BJJ Team in 2015. For a long time Park has been participating in many competition as an athlete and a referee and trying his best to cultivate good athletes. He has many Korean top BJJ athletes in his Clark Gracie Korea team. He always says,
“Jiujitsu makes you better, but respect makes you best.” He regards respect as the best value in practicing BJJ and teaches students as it is. Everyone can enjoy and learn true Clark Gracie’s BJJ and self-defence easily and merrily in his gym. All the BJJ practitioners in his team including Park are proud of them being part of Clark Gracie BJJ team and ready to be the best affiliate in the world.