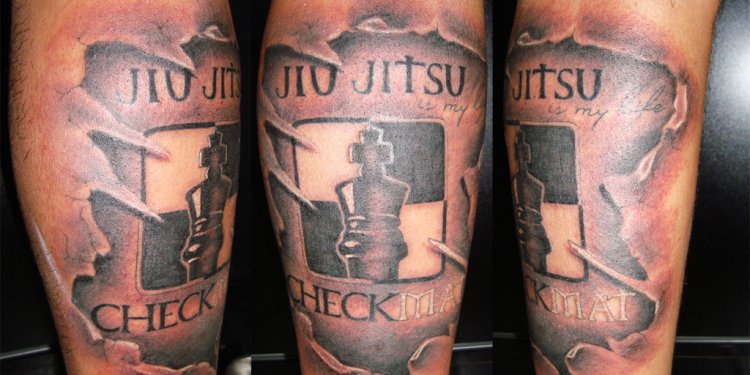 As BJJ Heroes is a huge fan of tattooing, the decision was made to write an article about this part of jiu jitsu’s lifestyle. Tattoos are a common place in jiu jitsu academies all over the world, from Rio de Janeiro to San José – Califoria, through London and even Tokyo, and there are more common places within this BJJ-Tattoo cultural bond than some might expect. In the early days of jiu jitsu, tattoos were not really an image accepted by Brazilian society, in fact, very little of the tattoo culture was available for Brazilians and this was seen mostly amongst sailors and people foreseen as thugs. As the sport grew, so did the bad boy image of the jiu jitsu fighter/practitioner, something of a stigma that haunted jiu jitsu for several years. This is where the jiu jitsu and the tattoo culture fist met, as outcast tribes of society.

In the 1990’s as jiu jitsu grew further outside of Rio de Janeiro, the tattooing culture was also starting to gain notoriety amongst the western cultures of Brazil, USA and Europe, tattoos started making their way into social acceptance through little tiny baby steps. Soon we started seeing more and more BJJ fighters proudly wearing their ink. The pit-bull/strong breed of dog tattoo was one of the first styles to be popular amongst jiu jitsu fighters, but today the bad boy smear that came with the fierce dog tattoo has faded this design into obscurity, below you will find a few of the most popular tattoo styles associated with jiu jitsu today:

The team tattoo a common place amongst many fighters, almost like a rite of passage, many practitioners feel such empathy with their teams that they make the (some would say) hard decision of branding it forever on their skin. Team spirit is a huge part of BJJ, and so is the dojo (academy) which is seen as an intrinsic part of each fighter. The first academy that turned jiu jitsu team tattoos into a fashionable trend was Gracie Barra, with several of their starts adding the look, usually on the inside of their arm, in the early 2000’s. Today we have several of the top jiu jitsu athletes of the world honourably carrying their team’s shield on their skin, from Roberto “Cyborg” Abreu with his Fight Sports academy tattoo on the forearm, through Gabi Garcia’s Alliance tat, Chico Mendes’ Checkmat calf tattoo, Talita “Treta” Ryan Gracie team tattoo and many more, the list is endless.

A tattoo style directly linked with BJJ’s roots, the Japanese kanji tattoo with the symbols for jiu jitsu is also used by many grapplers. These kanji signs are often placed on the back of the neck (top of the back in the centre), as shown on the mid picture of this section, but it is not always the case.

Also common in BJJ are the lettering tattoos, one of the most famous one (displayed on the top banner of this article) is Jeff Glover’s hand tattoo, a great and iconic image of this particular style. Many other big names of the jiu jitsu world have adopted this kind of tattoo, and much like the kanji tattoo, it can appear in different placements, being the most common one on a straight horizontal line across the back.

Like it was mentioned on one of a previous paragraph of this article, animal tattoos were amongst the first styles embraced by jiu jitsu. Though the ferocious dog tattoo design is less and less common these days, it still appears. The popularity, however, has clearly shifted towards the octopus as BJJ’s favorite animal tattoo. This increase of octopus’ popularity in jiu jitsu has been credited to one fighter and his own tattoo, Mr Eduardo Telles, founder of the TT and of 99 academies, who caries one of the coolest tattoos in BJJ on his shoulder (depicted below). The octopus’ M.O. as a predator of the sea, resembles the grappling trade, for these reasons (coolness factor and BJJ nuances) this animal became an habitue in BJJ tattooing.