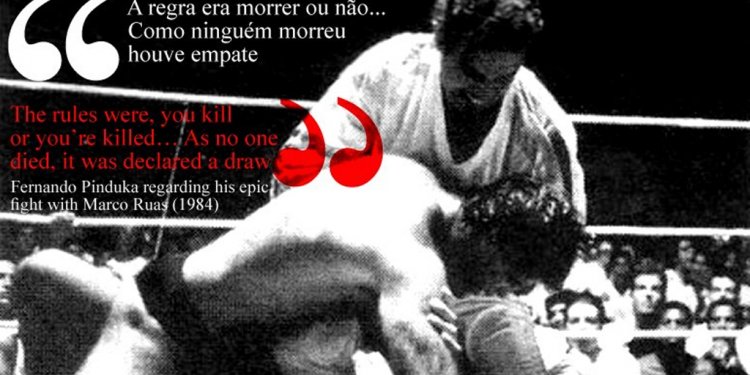 shirtless Eddie Bravo stood on one end of the jiu jitsu mat inside the Ginásio do Ibirapuera sports arena in São Paulo, Brazil, stared straight ahead, then walked toward his destiny.

It was May 17, 2003, the quarterfinal match in the 66-kilogram division of the Abu Dhabi Combat Club (ADCC) Submission Wrestling World Championship, one of the biggest challenges of its kind. Fans had gathered to cheer on masters of jiu jitsu, judo, wrestling and other grappling arts in a rare interdisciplinary tournament, a real-life Bloodsport. Bravo had turned 33 two days earlier, and this was his present: his first international professional tournament; his first matches on foreign soil; and a hostile crowd rooting for the guy across the mat from him, three-time defending champion Royler Gracie, scion of the family who essentially created Brazilian jiu jitsu. No member of the clan had ever lost to an American, certainly not in a competition broadcast on national television. Certainly not to an undersized Mexican kid from Santa Ana.

To the audience, Bravo was just another pretender-a brown belt, at that-who wasn't particularly good at the traditional method of jiu jitsu, with its stylized moves emphasizing grips on a gi (the sport's uniform) to gain leverage over opponents. But Bravo had a trump card: a style of his own, developed over thousands of hours of training that incorporated jiu jitsu techniques with tactics people might use in a real fight, not in a kimono-grabbing contest.

Trainers and fighters had little idea who Bravo was, and the ADCC tournament was stocked with legends-but Bravo was ready. He upset former jiu jitsu champion Gustavo Dantas in the opening round of the tournament with a rear naked choke, squeezing Dantas into submission. Now, he stood facing Gracie.

"Royler was a hero of mine, " Bravo says now, more than a decade later. "It was like being inside of a 3-D TV or something. It was surreal and weird, but I was confident. He didn't look that strong, and I was used to going against [muscular] wrestlers, so any time I got to go against someone my size, I was confident."

The face-off began. Bravo dropped to one knee in a half-guard position to better trap one of Gracie's legs. Gracie cautiously circled around him for a minute, looking for a way to blast through the American's defense. Then Bravo trapped his leg, and the two men dropped onto the mat. For the next eight minutes, they battled fiercely as they writhed about the mat, limbs locking and flailing to gain some, any advantage over each other. Gracie controlled Bravo through most of the match, with Bravo seemingly gripping on for dear life.

As the seconds ticked away, Bravo realized he had to make something happen or he'd lose. He decided to debut one of his unorthodox moves, one he had developed for months: the Rubber Guard, in which he'd hold one of his legs across the back of Gracie's neck to break the Brazilian's posture. The champ broke right through his Rubber Guard, but Bravo recovered and managed to figure-four his legs around Gracie's neck and apply a triangle choke. Bravo vised his legs together, trying to cut off Gracie's blood and air. When that crushing pressure wasn't enough, Bravo grabbed the back of Gracie's head and pulled him farther down into the triangle of his legs. A few seconds later, the most accomplished member of jiu jitsu's first family frantically tapped his hand to signal he was done.

Boos erupted from the crowd, as a stunned Bravo strutted in triumph around the mat before collapsing into a sobbing heap in the middle. A reporter tried to interview him, but Bravo was inconsolable. "He's a legend, " Bravo muttered. "I can't believe I won. I can't believe I won."

Bravo would go on to lose a semifinal match, but it didn't matter: He was the first American to beat a Gracie, and his legend was secure.

And then Bravo stunned the jiu jitsu world by retiring from competition.

He wasn't done with the sport, though. He opened a school in Los Angeles to teach his new system, 10th Planet Jiu Jitsu. It became the first well-known jiu jitsu program based entirely around training without wearing a gi, an innovation that led to the genre's revival in mixed martial arts (MMA), where conventional jiu jitsu fighters had gone from a dominating force in the sport's early days to a struggling minority.

Many jiu jitsu traditionalists and MMA aficionados think Bravo's system all bluster and no substance, and they think less of the man himself, not just for his moves, but also for his open love of pot, his celebrity friends and for besmirching their sport with upstarts who think they can take on anyone because they learned from the Man Who Took Down Gracie. But in the past decade, 10th Planet has expanded worldwide, with academies across the U.S.-including Costa Mesa and Buena Park-as well as locations in Europe, Asia, South America, Mexico and Australia. And his fighters are dominating opponents with their professor's style, bringing more acolytes into the fold.

"I don't think I even have to prove the effectiveness of my system anymore, " Bravo says. "I pass it along to the MMA fighters, and they go out and prove its effectiveness in their fights."

It's 10:30 p.m. on a Wednesday, and Bravo is sitting against the chain-link fence that sections off the jiu jitsu mat from the rest of the HardQore Brand Training Center near downtown LA. He's exhausted, but his eyes are wide, and his excited voice carries across the large building. Bravo adjusts the cuff of his long-sleeved rashguard (a jiu jitsu training shirt) to cover up the end of his colorful tattoo sleeves and loosens the strap on his protective headgear. In front of him, a few dozen students get in one last round of training. The 5-foot-8 Bravo isn't as large as many of the other guys on the mat, but he dominates the room.

"All right, guys, wrap it up! They're kicking us out!" Bravo shouts to his class.

Every type of jiu jitsu practitioner is here, from amateurs to professionals, white and black belts. They're doing Bravo's moves, all featuring names out of a Hasbro game: the Rubber Guard, the Twister, the Lockdown, Dead Orchard and more. The students haven't stopped going through drills and squaring off for at least two hours, several of them were here the day before, and many of them will return the next day. Some of the students have been with Bravo for years; others are just training with him for a week while they're on vacation. No one wants to miss a minute with their famous professor.

Not bad for a guy who originally wanted to make it big in music.

Bravo was born Edgar Cano in 1970 in Santa Ana-"where all the Mexican servant workers and gardeners lived, " he cracks. When he was 10, his stepfather left his mother, and his now-single mom had to raise three children on a salary of roughly $150 per week. To help make ends meet, Bravo became an entrepreneur early on, stealing pencils to sell at school at a dime apiece, then working at a swap-meet stand selling underwear and socks when he was 14.