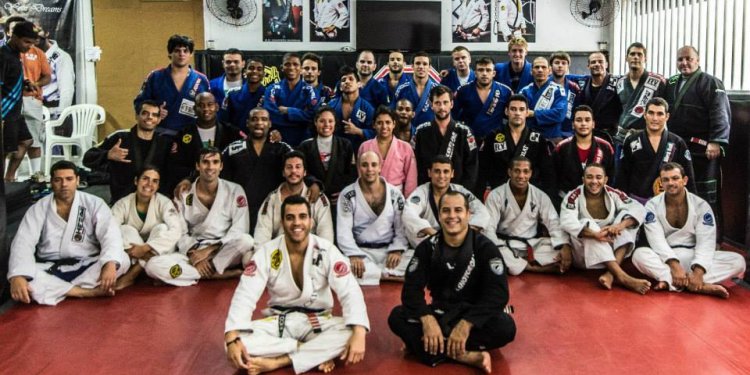 George Gracie was an illustrious member of the Gracie family, and the first champion developed by the Gracie Jiu Jitsu system back in the 1920‘s and 1930‘s. George Gracie was taught Jiu Jitsu techniques by his older brother Carlos Gracie and carried the Gracie flag all over Brazil fighting in different styles such as Jiu Jitsu, Luta Livre, Wrestling and Vale Tudo (No-Holds-Barred) having had one of the best unbeaten runs of his time.

George Gracie was born in 1911 being the second youngest of the famous Gracie brothers. George came from a wealthy and respected family in his native town of Belem do Pará, but as the Gracies fell into a financial crisis with his father, Gastao Senior, losing the his business, the family moved to Rio de Janeiro to start a new life and George’s life of luxury ended.

The Gracie’s were so poor at this point that they had to push the few influences they still had amongst the wealthy Brazilian families to survive. One of the measurements they took was to enrol Helio Gracie and George in a rowing club so they could be taken care by the nautical association. George’s mother knew the president of the club (Clube Nautico do Botafogo) who agreed to receive the pair as part of the free boarding student scholarship the club had on offer, the younger brothers of the Gracie clan moved there where they were fed and bedded. George stayed the least amount of time at the club due to Carlos (the eldest brother). Carlos took him out of the club to have him instructed in the art of Jiu Jitsu, the reason being, Carlos was opening his own Gracie Jiu Jitsu Academy (the very first ever) and wanted his brothers help in this new project of his. The first brothers taken to the Gracie Academy were George, Gastao and Oswaldo, Helio only joined them at a later stage.

George and Oswaldo (who was 7 years older then George) soon became assistant coaches, but George proved to be a sponge when absorbing the grappling knowledge Carlos was handing out, becoming the “star pupil” at the gym. George and Carlos didn’t always get along, the older brother always enjoyed many different aspects of life from his spiritual beliefs to his obsession with dieting, the dieting aspect (today known as the Gracie Diet) often caused some turbulence as George did not believe in his brother’s concepts and always chose to eat what he pleased, not convinced of the benefits dieting could bring to his training. Carlos was very interested in boxing and together with George they started training in the western fighting style, the pair even competed in the late 1920’s winning an amateur tournament.

As Carlos tried to show how effective his Jiu Jitsu program was, several challenges were issued to the local martial artists. The “Capoeiristas” (Capoeira practitioners) were the first to accept. The very first organized event was named: Desafio Capoeira vs Jiu Jitsu. George was matched with a stereotypical Rio de Janeiro Gangster and capoeira fighter. The fight was under what it is called today “Amateur MMA rules”, meaning, strikes were allowed on the feet, but not on the ground, so when the Capoeira fighter who went by the name of “Coronel” hit George’s face repeatedly on the ground, the fight was stopped and the victory awarded to George.

The next No Holds Barred event participated by the Gracie family caused controversy amongst the fighting community, George was put up against another Capoeira fighter who’s name was Jayme Martins Ferreira, George beat with an armlock, but it was Oswaldo Gracie’s fight that caused turmoil. Oswaldo was set to fight a very large greco-roman wrestler who was named Joao Baldi. Baldi weighed 135kg (297lbs) and was a mountain of a man. Everyone was waiting to see the Gracie be squashed by the big man, but instead Oswaldo disposed of Baldi in 58 seconds with a guillotine choke. No one in the stands had ever witnessed such a one sided fight with a size difference that big and immediately assumed the fight was a fix. The fighter (Baldi) didn’t help clear the air when (maybe trying to save face) he told the press that it was indeed a “marmelada” (fix) and that he would have never lost otherwise. When George read the interview in a newspaper, he was enraged, and being the hot head he was, he went out seeking for Baldi. When he found him, he beat him up in a public square. The beating was such that Baldi was hospitalized, and when he came out he pressed charges against the Gracie stating that he had been beaten with a brass knuckles, the police investigated the case, but as witnesses ditched the allegations stating that it was a fair fight, the case was closed.

In December 1931 George Gracie was set again to fight a “Capoeirista”, this time Mario Aleixo. Mario was a champion, being regarded as Capoeira’s last hope against the Gracie Jiu Jitsu. The fight was a clean sweep for the Gracie once again who won with a quick armbar. The relationship between clan leader Carlos Gracie and George started deteriorating after the fight between Helio and Fred Ebert (one of Helio‘s first battles). This fight took place at the Sao Cristovao Atletico Clube and it lasted over 1 hour. Before any of the fighters gave up, the police intervened closing the show, stating that it was a gruesome spectacle. Ebert’s face was completely disfigured and he could barely stand but he hadn’t given up, so the fight was declared a draw. Carlos accepted the decision and moved on, but George was furious that the fight hadn’t been given to Helio and was extremely agitated towards Carlos for not sticking to Helio as the head of the family. Because of this the relationship between the two brothers started its collision path, but at the time they managed to patch up and continued training together.

George’s golden period started around this same time. He drew against a Japanese Jiu Jitsu fighter named Geo Omori but a succession of wins after the draw made his reputation reach an all time high. That status was certainly cemented after the fight against Tico Soledade. Tico was somewhat of a celebrity in Rio de Janeiro, a power lifter and arm wrestling champion with a luta livre background who loved a brawl. At the time of the fight Tico weighed in at 80kg (176lbs) against the 63kg (138lbs) of George, but size didn’t matter for the Gracie as he finished the fight in the second round with a “Mata Leao” choke. After the fight with Tico the “Gato Ruivo” as George was called, opened up his own academy. Even though he was still managed by his older brother the distance between the two was noticable.