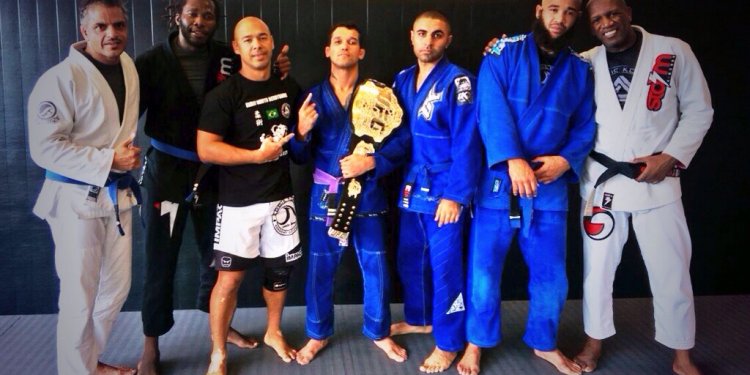 Lotsa space for your liquids.

Your favorite word on a white mug.

Brazilian Jiu-Jitsu (BJJ), also known as Gracie Jiu-Jitsu (GJJ), is a martial art that was developed in Brazil by the Gracie family during the mid-20th century. Originally based on the Japanese Martial art of Judo as it existed before World War II, it has since developed into a relatively independent system with a large emphasis on ground fighting and grappling.

History
A Japanese judoka, prizefighter, and former member of the Kodokan named Mitsuo Maeda emigrated to Brazil in the 1910s and was helped greatly by a Brazillian politician named Gastão Gracie. In return for his aid, Maeda taught Judo to Gastão's son Carlos, who then taught the art to his brothers, including Hélio Gracie. Through their own study and development, Carlos and Hélio are regarded as the originators of Brazilian Jiu-Jitsu as a style distinct from Kodokan Judo.

Brazilian Jiu-Jitsu inherited its emphasis on using off-balancing, leverage, and the opponent's own power, as well as a majority of its technique from Kodokan Judo. However, there has been considerable divergence since that time as Brazilian Jiu-Jitsu evolved. Some argue that the differences are more in culture and moral goals than in the physical principles and techniques of the two arts.

The main difference is that Judo, especially in its Olympic sport form emphasizes throws, while Jiu-Jitsu emphasizes submission of the opponent using joint locks or chokes. Judo has a much higher amount of referee intervention; in Judo matches, the competitors are often returned to the standing position, while in Jiu-Jitsu matches, the participants are generally allowed to remain on the ground while working towards a submission.

Contributing factors to the divergence include the Gracies' desire to create a national martial art, the influence of Brazilian culture, the non-participation of the Gracie schools in sport judo, the post World War II closing of the Kodokan by the American Ocupation Authority (which were only allowed to reopen on the condition that emphasis be shifted towards sport), as well as the Gracies' own additions to the body of technique and opinions regarding self-defense, martial arts and training methods; and, more recently, the influence of mixed-martial-art competitions such as the Ultimate Fighting Championship.

Go to to learn more about Gracie Jiu-Jitsu.

another dumb sport for pussies who wanna look tough in front of others.