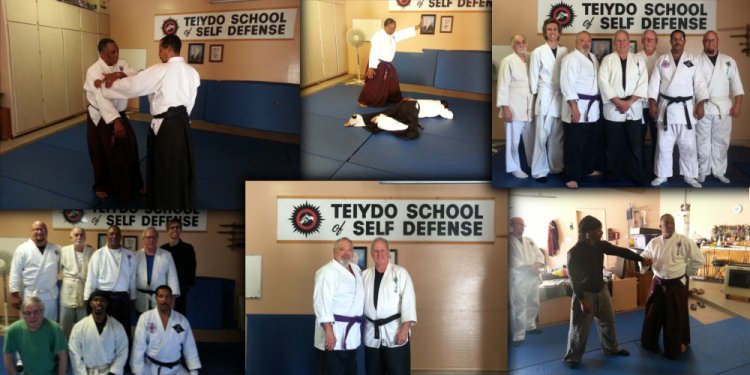 Nestled along a back street in a town one hour northwest of Tokyo by train, is a dojo unique in modern Japan. It is called the Hakkoryu So Hombu Dojo (General Headquarters School of the Eighth Light Tradition), and was founded by Shodai Soke (First Generation Head) Okuyama Ryuho. This dojo provides for training in the arts of Hakkoryu Jujutsu (a Japanese system of self-protection) and Hakkoryu Koho Shiatsu (traditional medical therapy using finger pressure). Following Shodai Soke’s retirement in 1986, his son, Okuyama Toshio assumed the responsibilities of the school. At that time, Waka Sensei, as Okuyama Toshio was then known, took his father’s pen name “Ryuho”, and with it, the title Nidai Soke (Second Generation Head). Nidai Soke Okuyama Ryuho now directs and has total authority over all Japanese dojo as well as branch organizations in several countries. Shodai Soke passed away in November of 1987.

Shodai Soke was born in 1901 in Yamagata Prefecture. His given name was Okuyama Yoshiji. He graduated from the Tokyo Seiji Gakko (Tokyo School of Political Science) and in 1927 moved to Asahikawa, Hokkaido where, along with Mr. Namikoshi Tokujiro, he established a medical clinic (Mr. Namikoshi was later to establish the now famous Nihon Shiatsu School in Tokyo).

During his early life, Shodai Soke traveled extensively from his base in Asahikawa studying many of the martial and medical systems of his day. During that period, the best way to find qualified teachers of Jujutsu was to find good doctors of oriental medicine. Included in his martial studies were Daitoryu Aikijujutsu (which he studied in Hokkaido primarily from Kyoju Dairi Matsuda (Toshimi) Hosaku and later for a short period of time from Daitoryu Soke Takeda Sokaku), Seigoryu Jujutsu (studied in Kyoto), Hasegawakoryu Kenjutsu (sword style studied in Hokkaido), Nitoryu Kenjutsu (sword style studied in the Kumamoto Hot Springs area), Sojutsu (spear combat studied in Yamagata Prefecture), Jojutsu (stick combat studied in the mountains of Niigata), Kyujutsu (archery studied in Yamagata Prefecture), Shurikenjutsu (throwing weapons studied in the mountains of Niigata), as well as other lesser-known systems. In all, he studied under twenty teachers of various bujutsu ryu.

At the same time, he had the opportunity to study with leading masters of traditional Japanese medicine including circulation (meridian-in/yo) theory, finger pressure medicine, acupuncture, massage, and traditional herbs and diet. He eventually became an instructor of Daitoryu Aikijujutsu, but in 1939 he broke with Takeda Sensei, calling what he taught “Meishido”.

The Founding Of Hakkoryu Jujutsu

Finally, on June 1, 1941 he held the “Hakkoryu Kaiso Hokokusai” (Ceremony Proclaiming to the Kami (Gods) the Founding of Hakkoryu). Hakkoryu was born on this date. Moving to the Kanda district of Tokyo, he established the Hakkoryu Kobujuku (Private School for the Classical Military Art of Hakkoryu) where he operated a popular training hall while also providing direct instruction to the police and military. When the Allied bombings of Tokyo became too severe, he and his followers fled the city and joined the Mount Haguro sect of Shugendo (a mixture of esoteric Buddhism and Shintoism) in Yamagata Prefecture. There he was to stay, study, and teach until around 1947, at which time he moved to Omiya City (now known as Saitama City), Saitama Prefecture and established the Hakkoryu So Hombu Dojo, sometimes referred to as the Hakkoryu Juku Hombu Dojo. The dojo has been in this location ever since.

The name “Hakkoryu” is based on a philosophical Japanese view of the color spectrum as being divided into nine bands of light. The eighth shade is infrared, which is invisible to the naked eye but extremely powerful, both characteristics apparent in Hakkoryu’s techniques. The number eight in Japan also has associated with it numerous philosophical and religious meanings that are beyond the scope of this brief introduction.

Little known and often misunderstood outside Japan, Hakkoryu is a Jujutsu system which uses the body’s Keiraku (meridian system) to create varying amounts of pain to control an attacker without necessarily causing serious injury. Japanese and traditional Oriental medicine teaches that “Ki”, one of the non-physical aspects of life, flows through Keiraku in the body. Certain Tsubo (special points) along the Keiraku are sensitive to touching or striking and cause sharp distracting pain, but do not necessarily damage bones, joints, or other body tissue. These are the focal points of Hakkoryu techniques that a trained exponent uses to distract, dispatch, or arrest an attacker. Because of the non-injurious potential of these techniques, Hakkoryu is said to be humanitarian in nature.

The primary means of instruction in Hakkoryu is through Kata (choreographed combat sequences) in which the principles of Shodai Soke’s system are introduced. A thorough grounding in Omote (surface techniques) is required of all ryu disciples. There are four basic Kata: Shodan (first degree), Nidan (second degree), Sandan (third degree), and Yondan (fourth degree), which also correspond with the black belt level a disciple holds. There are no higher Dan ranks regularly awarded in Hakkoryu, other than a Godan (fifth degree) which may be awarded in special cases, or higher degrees at the discretion of the Soke only. Each Kata contains numerous Kihon Waza (basic techniques) which must be mastered and thoroughly understood. These Kata embody the wisdom and experience of Shodai Soke and are to be handed down as they are, without change to the core principles, to successive generations. Mastering the Omote is not to be rushed, for inevitably the resulting damage will make itself evident. The essence of Hakkoryu techniques will remain elusive to those who have not undergone prolonged study of the basics under a certified Shihan.

Contained within the Kihon Waza are Gensoku (principles) which are the actual lessons of the techniques. The introduction of Gensoku through Kihon Waza follows a rational order where subsequent principles build onto previous ones, developing into a cohesive whole. Once a disciple learns these Gensoku, he/she is able to develop their own principle-based actions using combinations or unique applications of Gensoku for a potentially infinite number of circumstances. This allows the disciple to create techniques and applications suited to one’s own needs and circumstances, rather than blindly memorizing the techniques taught by instructors. With Hakkoryu, one achieves the ability to create rather than merely imitate.