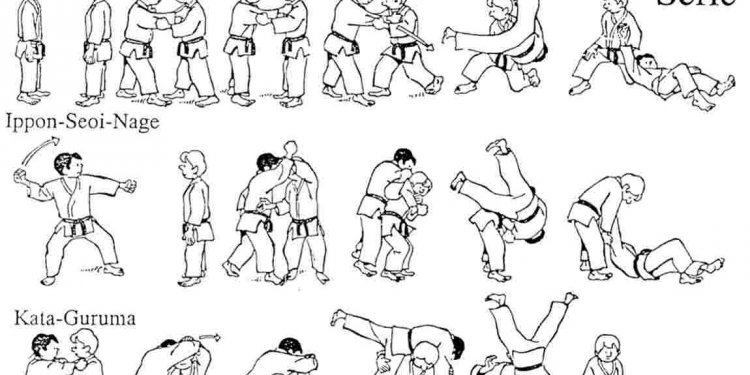 For the last move in our jujitsu techniques series, check out the very first jujitsu weapons technique George Kirby learned.

Here is what the jujitsu master had to say about it:

“Believe it or not, this was one of the first techniques I learned under Seki and it was for a knife thrust. There are lots of body movement and footwork skills that are learned in the process of executing this throw properly. Does it work? Ask one of my black-belt high-school girls who was attacked with a knife at a bus stop and broke the attacker’s wrist.”

1.) Assume a ready position as you are threatened with a knife.

2.) Pivot your right foot back, thus moving your body out of the way of the straight knife thrust. (Note the arrow indicating the movement of the right foot.) After his knife hand has passed your left hand, reach for the wrist of his knife hand from behind.

5.) Pivot your left leg back (as indicated by the arrow) in a counterclockwise direction and push his bent hand with your right hand.

6-7.) Turn his hand in a counterclockwise direction while you continue to pivot your left foot back until you bring your opponent down.

8.) For a wrist-snap or elbow-snap submission, place your right instep tight against his right armpit with your foot on the ground and his elbow just below your kneecap. Keep his wrist bent down (and his arm straight) and turn it to the left as you turn to your left. Have your left leg away from the attacker for balance.

9.) If the attacker still has the knife, take it away from him before releasing him. For the submission (see inset 9A), place your left thumb next to your right thumb behind his hand. This hold also can be used for the throw.

(George Kirby is the author of —He is also the co-founder of the American Ju-Jitsu Association, an educational foundation, as well as a tactics consultant for the Los Angeles Police Department and organizer of the popular Camp Budoshin in California.)