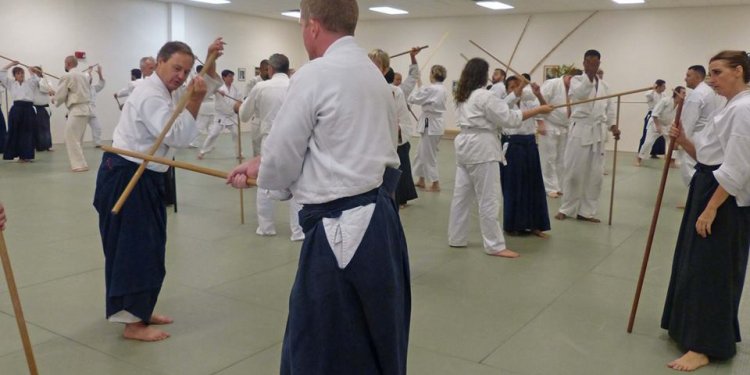 Nations Aikikai is a member dojo of the United States Aikido Federation (USAF) recognized by the Aikikai World Headquarters in Japan. Its purpose is to provide instruction in the Japanese martial art of aikido according to the principles of the founder, Morihei Ueshiba. Nations Aikikai was founded in 1996. Aikido is a self-defense martial art suitable for the whole family.

Nelson Andujar is the founder and chief instructor of Nations Aikikai. He is one of only a few within Aikido to hold the rank of 7th Dan and the only 7th Dan in Texas. Sensei Andujar has been in martial arts for over 46 years. He started training in Martial Arts in 1965 training with Antonio Pereira for 19 years in the art of Jujitsu. Wanting to learn more about the inner power, and the focus of Ki, he entered Aikido training under the guidance of Sensei Y. Yamada, at the New York Aikikai. Sensei Yamada holds the rank of 8th Dan in Aikido.

Nelson moved to Miami where he started the Miami Aikikai 33 yrs ago, which is still under his direction.

Nelson believes that a good sense of timing and distance is very important as well as learning the fundamental basics. His trainings are relaxed, but stern, demanding complete attention and focus from all his students. However, during class and training his laughter (and good humor) frequently vibrates off the walls and he is famous for offering “floating ideas” in furtherance of his students understanding a particular technique he may be demonstrating or teaching.

Nelson taps into the natural abilities of each student and then fine tunes them. His standards are high and he expects more from his students. He practices the art of Ki and movement instead of the power of muscle and force.

Clay Crawley 1st Dan [pic]
Clay first started practicing aikido in 1995 when he joined Aikido of Charlotte in North Carolina. He continued until 2001 when his university studies required him to concentrate focus on his Master’s degree. Having moved to Houston in 2008 and upon discovering Nelson Andujar, Shihan he decided to resume his aikido training. In addition to his Shodan, which he received in 2012, Clay posses a Sandan in Jee Do Kwan Tae Kwon Do, an art he has practiced since he was seven years old.

Clay’s other passions are: foreign languages, history, politics, and travel. His personal philosophy is that one should never stop learning nor should they every stop pushing themselves beyond their comfort zone.

Tom Warmath 1st Dan [ pic ]
Tom first started training in Aikido in 2005 joining Aikido of Westchester (AOW) in White Plains, New York as a father daughter adventure as his teenage daughter was interested in learning about a martial art. Tom’s daughter was side tracked by other interests after about 1 ½ years of training but Tom continued his Aikido training at AOW, The Aikikai of New York and Aikido at Nashville Aikikai and then, after moving to Houston in 2012, at Nations Aikikai. In addition to his Shodan in Aikido, which he received in 2014, Tom has studied, starting in 1974, Tang Soo Do karate achieving Shodan rank. Tom also spent a year studying Israeli Defense Force (IDF) fighting techniques.

Tom’s other interest and passions include: fly fishing, golf, classical music and travel. His personal view of Aikido training (and one of aikido’s most appealing points) is that there is always something new to be learned every time you step on the mat. In addition he really likes working with beginners as well as older adults whom are coming as new students.