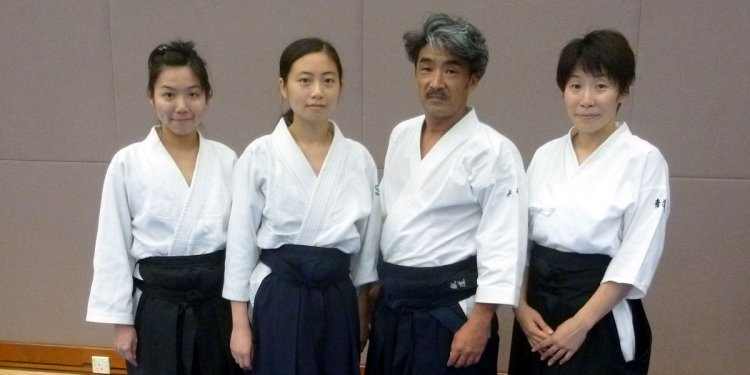 Why are women so good at Aikido? What is it about the martial art of aikido that draws and keeps so many ladies?

First of all, Aikido is different from most martial arts. Instead of defeating or overcoming an opponent, the goal of aikido is to harmonize with your opponent in order to neutralize the conflict. The word ‘opponent’ is used when talking about sports, wars and other zero-sum contests. It usually conjures an image of a rival who must be defeated in order to be successful. In aikido, we use the word ‘partner’ instead. ‘Partner’ comes with a very different set of connotations. A partner is someone you work with in order to achieve a mutual goal. The highest aim in aikido is to turn an opponent into a partner.

‘If you keep training and being very strict with yourself, your training will give birth to beauty. Your aikido will turn into a dance.’ - Shimamoto Katsuyuki

How much time would you spend dancing with a partner who resisted your every move? You would be lucky to last one song before you started looking for an excuse to get away. Aikido is the same. People who practice aikido are trying to find a way to make contact and move with their partner with as little effort as possible.

'…add strength to strength, there is no weaker sex, no weaker person. Together you becomes strong, so it can minimize your fear and maximize your strength.’ - Anna Sanner

Shimamoto Katsuyuki Shihan describes aikido as ‘positive budo’ or ‘a positive martial art.’ In aikido, one defends themselves from an attack by adding his or her strength to the strength of the attacker. If someone attacks with one hundred percent of their power, an aikidoka can add as little as 1% of their own strength to the opponent’s attack in order to neutralize it. By absorbing your partner’s power you become even stronger. This is what allows the smaller person to overcome someone much larger. It also gives greying old men the power to toss much younger and stronger partners with no effort at all.

‘Your partner is your baby.’

That is to say, one should treat a partner as a mother would an infant. Through aikido we learn to treat our partners with the same love and compassion that a parent does a crying baby. A mother or father can learn to read the pitch and urgency or a baby’s cry and understand if the baby is tired, hungry, in need of a fresh nappy or merely wants to be held. Using the same intention of compassion and love, aikido can be used to make a connection with our training partners to create beautiful expressions of love in the dojo and in daily life.