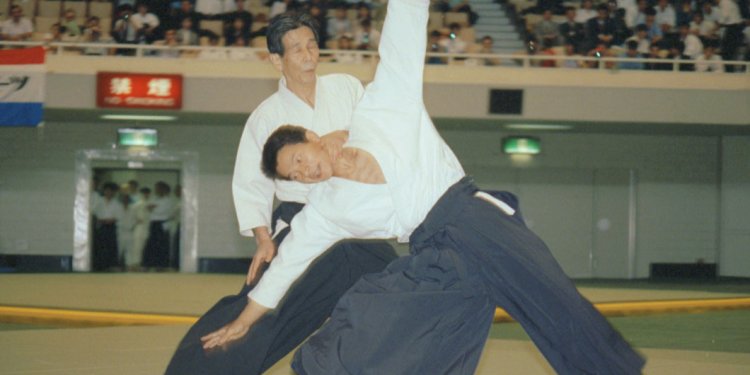 Marco Marini: What, actually, is "Aiki"?

William Gleason: Aiki is the unified state of Heaven, Man, and Earth. It is the vertical or spiritual unification of an individual and his or her environment. This state is absolute and therefore has no opposite or back side. When it is brought into motion it becomes ki-ai or yamabiko, the mountain echo, as O-sensei called it. This means that, maintaining your vertical unity, your ki goes out to your partner and again returns to yourself.

Marco Marini: What is Aikido today?

William Gleason: Unfortunately, Aikido today has lost its origin, or in other words, it has lost Aiki. Koichi Tohei tried to remedy this situation by creating the ki-society but, unfortunately that approach was unsuccessful. It seems that, in his own depth of understanding, he did not grasp the difficulty of others understanding as well.

Marco Marini: Given today's martial arts panorama, how can we motivate students to approach Aikido?

William Gleason: Once again, I believe that the answer here is to reinstate aiki back into Aikido. Aikido was once a formidable martial art, yet today it receives little respect as a self-defense art, from serious martial artists of other disciplines.?

Pasquale Robustini: About Aikido's efficiency. Many are concerned about the effectiveness of Aikido in a street combat. I usually think Aikido is efficient in other aspects, like for example, making people better, learn how to use our body correctly. It is a "do", not a "jutsu". What do you think?

William Gleason: If Aikido is truly a "Do" then it must necessarily contain the "jutsu" as well. The "Do" is a spiritual discipline which has the "Jutsu" as its foundation. If this foundation is lacking then it is neither a "Do" or a "jutsu" and has little value for either self-defense or spiritual development.

Pasquale Robustini/Marco Marini: What's the difference between Aikido and Aikijutsu?

William Gleason: Aiki jutsu today seems to be in the same boat as Aikido. Its essence has been hidden to the extent that it can no longer even be found. It is not ultimately profitable to pass down the real article because then people don't continue to pay you money forever.

Marco Marini: Do you advice any particular exercises for training the Ki, or a particular kind of Aikido training?

William Gleason: Yes there are many kinds of training that one can and actually must do. For example, Chi Kung training is at the root of all martial arts. The catch here is, however, no really important training can be done without close connection with a teacher.

Marco Marini: We know about your experience with Seigo Yamaguchi, we know he is recalled as a genius, but we'd like to have some first-hand impression from you, what you remember most, some anecdotes...

William Gleason: Well, if you look on my website you will find an entire article I wrote about my experience with Yamaguchi sensei. Check it out.

Pasquale Robustini: In what way was, in your opinion, Yamaguchi sensei a genius?

William Gleason: Anyone who really grasped the essence of Aikido from O-sensei had to be a genius, because O-sensei didn't explain the details of the art to anyone as far as I have heard. Yamaguchi sensei and Tohei sensei, and several others were definitely martial geniuses.

Marco Marini: About you own dojo: How many classes you give there? How is it organized? Are you part of an Aikido federation? What are you relationships with that federation?

William Gleason: My organization, Shobu Aikido Inc., is a member of the Aikido Schools of Ueshiba which is headed by Saotome sensei. My relationship with Saotome sensei goes back to the early 1970's and he is definitely another one who can be called a martial genius. As far as my own dojo we have classes daily. It is necessary to train a lot if one hopes to gain proficiency in Aikido.

Marco Marini: If someone wanted to train with you how can he or she reach you? Are you available for week or half-week long seminars?

William Gleason: I travel around America and other places teaching seminars quite a lot, yet if someone really wants to learn what I am teaching, it is necessary to come to my dojo and train for a couple of years. Without this kind of dedication I doubt you can grasp the Aikido which has taken me nearly 40 years to learn.

Pasquale Robustini: Up to what ranks do you run tests in your organization? Do you think they're important? Or do you think it could be advisable just to informally grant a student a higher degree when the teacher sees he/she is ready?

William Gleason: I touch on this subject in my new book but, in short, rank these days has little meaning. It is being given more for political reasons than for ability and the criterion of different teachers for giving rank is completely different.

Pasquale Robustini: It is virtually impossible to give ranks that are actually a measurement of the technical level. What is the meaning of a black belt in Aikido today?

William Gleason: I don't believe that it is impossible at all. Just throw out politics and maintain your own integrity and ranks would already be standardized.

William Gleason: A world headquarters is almost a necessity if there is to be a standard of Aikido across the world. The problem arises when that headquarters tries to control world Aikido. A great leader allows people to grow with a minimum of interference.