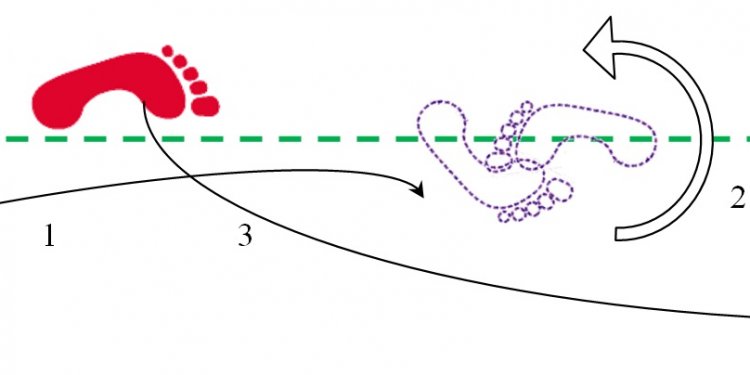 
There is an ongoing discussion in our dojo about the names for footwork. One instructor teaches that a pivot on one foot is called tai sabaki while a pivot with a step is tenkan ashi. Another instructor sort of agrees but always notes that it is really the other way round.

I used to think that tai sabaki was just a general word for footwork.

Could you please clarify this for me?

I'd probably refer to "footwork" as "ashi sabaki" and probably say that "tai sabaki" more means "body movement." Both, to me, are general terms referring to a group of movements like "tenkan, " "irimi, " "tenshin, " "tenkai, " and so on.

More specifically, I have heard the "tenkan" footwork being described as pivoting on one foot while the other foot sweeps behind - ie if two are done successively, it's kind of like drawing a circle/ellipse on the mat with one leg while the other stays in the center.

Our Sensei always uses the phrases te sabaki-hand movement...tai sabaki-body movement, oshi sabaki-foot movement. If I am spelling them correctly. :)

Thanks for your help guys, I think it is a bit clearer to me now. What would you call a step and a pivot then? (like in iriminage)

In Doshu's book New Aikido foot work in general is referred to as unsoku. The book Aikido refers to footwork as Ashi-sabaki. The categories seem to be as follows

Ayumi Ashi=basic step. This appears to be the typical foot work used in many styles of karate where one slides the back foot up to the front foot and then steps forward (sort of a zig zag). Aikido calls this "walking" except the toes are pointed outward.

Tsugi Ashi=sliding step or shuffle step by sliding the back foot up to the front foot tand then step forward on the front foot without chaning hanmi.

Okuri Ashi=sending step=the only difference I can see on page 29 of New Aikido is the stance is a little wider with the step up.

TENKAI ASHI=pivot, pivot on the feet so you face 180 in the opposite direction (Aikido) New aikido seems to put this in the body movement category which is just referred to as sabaki (tai sabaki in Aikido).

TENKAI ASHI=pivot from one hanmi to the opposite hanmi or oblique stance (Aikido). Called a revoling turn (Tenkai) in New Aikido and is in the body movement category as a revolving turn-this is the turn from kaitennage (uchi version).

TENKAN ASHI=pivot with back step (Aikido). Just called TENKAN in New Aikido and is a body movement. When practicing with a partner it becomes TAI NO TENKAN HO (body turning) (Aikido) and Katate-dori Tenkan (New Aikido).

TENSHIN=sweeping body movement. This is the movement of yokomenuchi shihonage where you step to the inside and switch feet

Are we confused yet? I think things seem to be evolving in terms of terminology and categorization (old books are different).

I think you will find it all over the board. I was originally taught: te sabaki=hand movement; tai sabaki=body movement; ashi sabaki=foot movement or foot work.

Thanks for your help guys, I think it is a bit clearer to me now. What would you call a step and a pivot then? (like in iriminage)
They call it irimi-tenkan in our dojo. The other terms we use are very similar to those in the post above. We don't use 'tenshin' and 'okuri-ashi', though.

At first, I thought of the general terms, such as tai-sabaki, te-sabaki, ashi-sabaki, etc, as pretty much self-explanatory (tai - body, te - hand, ashi - leg), but I checked a dictionary and could find no meaning of 'sabaki' (or 'sabaku') that matched 'movement'. Perhaps I wasn't looking in a sufficiently large one? Someone who's better at Japanese help?

The character for sabaku (捌く) basically means "The handle, deal with." As such, I'd probably translate it as the method in which you handle your body/arm/whatever.