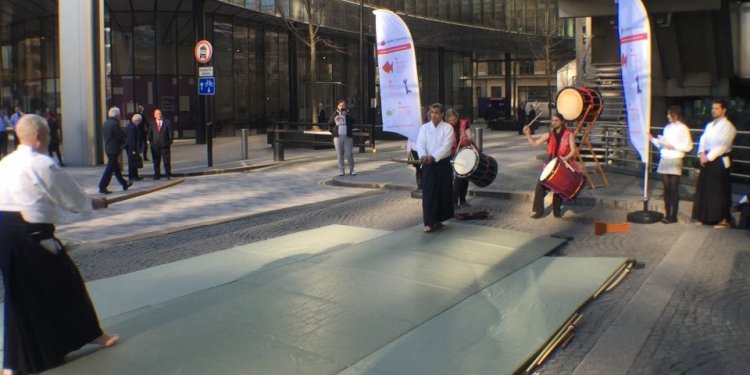 The following article has been used with the kind permission of Seiji Tanaka Sensei of the Japan Aikido Association.

First of all, I would like to explain how, where and why Tomiki Aikido started. It goes back to the month of April, 1958 when Waseda University approved our Aikido Club as an officially sanctioned sport club (called “Undo Bu” in Japanese), while no other universities recognized any Aikido clubs as such. Instead, all other Aikido clubs were called “Doko-Kai”, meaning a loosely organized club made up with people of the same interest. These unsanctioned sport clubs had neither the prestige nor the status of other sanctioned clubs such as Judo, Kendo, Karate, baseball, soccer, and other major sport clubs.

Prior to April, 1958, there was no Aikido club, even at Waseda University. Professor Kenji Tomiki was the Judo instructor and he taught Aikido to some members of the Waseda Judo Club before or after Judo practice. Obviously this arrangement had many limitations for developing truly well-trained Aikidokas.

I was very fortunate to be a freshman in this historical year of 1958. the Japanese school year begins in April, so that I could receive Professor Tomiki’s instructions from the club’s first day as a fully sanctioned sport club and benefit from his burning desire and profound vision of making Aikido the same as Judo, Kendo, and Karate.

One of the strict requirements attached to this official recognition by Waseda University was a stipulation of being able to measure and/or judge the progress and ability of Aikido students. In other words, any clubs belonging to the official Athletic Association must have competition of some fashion. This prerequisite was most welcome by Professor Tomiki, who had his dream to make Aikido as competitive and as internationally popular as Judo. From the very inception, he had his vision to create the method of Randori-Ho (free sparring practice) by combining the superb Aikido techniques taught by Osensei Morihei Ueshiba and the scientifically ideal educational doctrines taught by Professor Jigoro Kano, the founder of Judo (which means “Gentle Way”). Professor Tomiki frequently told us how fortunate he was to receive direct training from these two extremely talented teachers. He said, “I learned the true meaning of really profound martial skills and techniques from Ueshiba-Sensei and I learned the doctrines, innovations and educational merits from Kano-Sensei”.

Let me share with you now why Professor Tomiki wanted to change and enhance the methods of Aikido training. Unlike the first generation of Ueshiba Sensei’s students, who had previously experienced some other competitive martial arts such as Judo, Kendo, Sumo and others, the second, third and future generation students of Kata, by practicing only the traditional Aikido, would not know how hard and, indeed, so difficult, it would be to apply Aikido techniques effectively to equally well-trained opponents when resisted or counter-attacked with 100% free will. Also, unlike the old days, when they had numerous actual chances to try their skills in combat situations, in the modern society, we do not have the chances to test our skills.

With the backdrop of these basic realizations, Professor Tomiki insisted on the needs of competitions in order for Aikido practitioners to learn a moment of truth and other virtues such as mutual respect, cultivation of true sportsmanship and friendship, endurance, humility, patience, courtesy, creativity, determination, calmness, courage, alertness, swiftness, and many other educational merits. These ingredients are physically as well as mentally and spiritually paramount factors for our growth as human beings.

He predicted that, when there was a total lack of objective ways to measure the degree of effectiveness and progress, ten students eventually would create ten different styles of Aikido. Unfortunately, he was right on in his prediction.

When Professor Tomiki was interviewed by a reporter who asked him “What are you going to do with Aikido?”, he responded simply and directly by saying “Nothing but adding eyesight to a paper dragon.”

Needless to say, safety was of the utmost importance in his mind, just as it was for Professor Kano when he created Judo out of various Jujutsu styles (mainly Kito-Ryu and Tenshinshinyo-Ryu), so eventually he created the 17 Randori techniques with strict safety measures and rules.