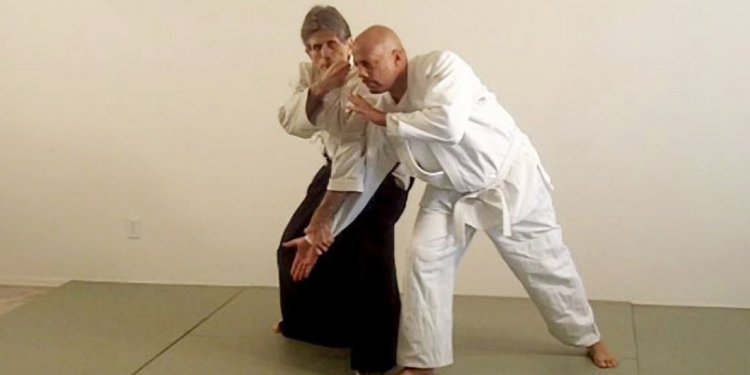 This video engendered many comments on Facebook and the Aikido Journal blog site. Here are three videos linked by participants in the discussion that illustrate solutions to the kotegaeshi problem, the first by Hitohiro Saito Sensei, the second by Christian Tissier Sensei, and the third by Tsutomu Chida Sensei.

A selection of the comments we have received follows below:

Patrick Augé: In jiyû randori (freestyle) where kaeshi waza and resistance are expected from a commited Uke, two common situations may occur: 1- Uke follows Tori and lands in front of him following up with a footsweep, a strike or a sutemi waza. When Tori feels this happening, he will place an atemi in Uke’s face with his two hands in kotegaeshi position and continue with the technique; 2- Uke hardly moves, his weight is on his heels, his arm aligned with his shoulders, Tori is placed in his blindspot and applies kotegashi. There is no perfect way as one discovers through the practice of jiyû randori. Every partner is different and we have to constantly review and polish our techniques. Please continue to question the value of what we tend to take for granted.

Leo Payne: The speed at which you apply the kote gaeshi. A fast, powerful technique would render uke’s ability to strike you useless even if you were standing in front of them and not doing atemi. Secondly, in Yoshinkan a strike to uke’s face is when turning back towards them is in all basic Kote Gaeshi techniques. The striking is nothing new. In fact it is essential for keeping uke’s balance broken before the throw

Check out Takeno Sensei going through the basic technique from a shomen uchi. Look at the emphasis on the atemi

John: I like the methods you’ve shown. Kawahara Sensei had two types of practices for kotegaeshi that helped me: There would be a Suwari Waza practice with no leg work, with the goal of controlling Uke without body movement using their wrists to control their spine, hip and shoulders. This practice was done very slowly, to look for holes. The second practice I think he considered more advanced. Nage grabbed Uke by the sleeve, where there was no hope of controlling Uke by a lock. Whether or not Uke could strike or fell at all was completely dependent on body movement, flow and timing.

Paul Araki-Metcalfe: Hi Stanley, I have seen this all over the world, from beginners to Shihan.
Do you know the fable ‘The king with no clothes”? I believe it has a lot to do with your next grade. Co-operative uke are quickly promoted. Unco-operative uke, or ones who show the faults of nage, do not get promoted fast. Therefore everyone in the Dojo or organisation picks up on that rather quickly. Suddenly, everyone is doing it incorrect martially, but correct if you want to rise through the ranks. I doubt that it will change, as the people in charge would have to admit that they were wrong. Sadly, whenever anyone points out the glaring truth, they are chastised and usually thrown out. I just work at improving myself, my techniques, and showing my students the pitfalls of blindly following what other do.

James Dempster: Totally agree Stanley. I try to get my students to take ukes balance towards the outside of ukes leading foot before attempting this technique. This surprises a lot of people. But makes the ‘street’ application so much easier and effective I feel.

Milos Jovanovic: Very nice observation. There is another way of breaking Uke balance before making the kotegaeshi throw. Before making kotegaeshi, in position where your left hand is around the UKE`s wrist and right on his hand, make seesaw (your left hand down-right up). This will also unbalance Uke.

Mark DeFillo: This is excellent. I just watched the kote gaeshi section of a DVD of Ueshiba Moriteru Doshu; to my inexpert eye, he appears to avoid creating the opening by unbalancing and downing uke before the latter swings back around into the vulnerable zone. Paying particular attention to the footwork, I see that in each example presented, uke’s feet are still in a position keeping him unable to reach nage, when he is downed. In Pranin Sensei’s video here, the same footwork situation is in place in the first example (nage keeping his center low to prevent uke from turning); in the two atemi examples, it looks like the atemis arrest a potential turn as it starts. I’m not experienced enough to be able to tell whether Doshu’s technique hinges on timing or if something else in his technique keeps uke from turning back into a threatening position. It’s important in budo to be able to analyze both the actions of others and ourselves; thank you to Pranin Sensei for bringing out this major point to look out for. I’m reminded of Saito Sensei explaining (in seminar footage) the importance of avoiding a similar opening when doing tai-no-henko.

James Dempster: I tend to agree Stanley, a powerful atemi will assist but ask yourself. How does this look to a jury when replayed on CCTV / mobile footage etc etc….I tend to agree with your view, certainly for modern street Aiki, which is different to traditional budo, in many ways.

Joe Mchugh: In the moment that uke turns he reaffirms his attack intention, perhaps at the moment of his turning you immediately apply kotegaeshi, taking the energy of his continued attack. if you wait until he has established his center again after turning. Then I agree Tori is in difficulty.

Russell Jacobson: Thank you, Stanley Pranin Sensei. This has long been a pet peeve of mine and you addressed it very nicely. I also step out of the “zone”, as in a ura technique of kotegaeshi. For an omote version I like to drop them on their front corner (no opportunity for them to turn into a counter attack). Sort of difficult to describe but I think you get my meaning. Happy training!

Perry Ivy: The other method is to keep unbending arm on the tenkan, if you do so you will keep their arm, shoulder and back bent.

Sean Bledsoe: One approach to this problem is an emphasis on coordinating the throw with a step with the inside leg, blocking out uke, as demonstrated in the second part of Christian Tissier’s video…

Jason Ramsay: I find success in keeping it low and not giving it back to uke, also cut like a sword and uke has no chance, I mean really cut like it’s a sword.