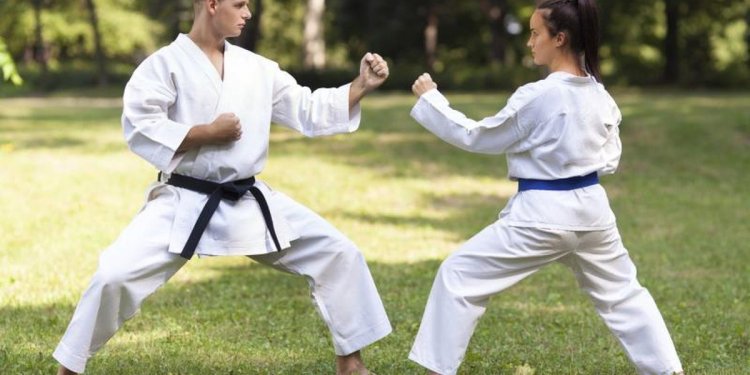 Aikido was founded in Japan in the early 1900s with roots in other forms of martial arts, including jiujitsu. Hapkido was developed in the late 1800s in Korea, though it contains elements from Japanese martial arts as well. Although similarities exist, there are differences between aikido and hapkido.

The word aikido translates to three components: ai, ki and do. Ai refers to the Japanese culture, ki is breath or spirit and do is a way or doctrine. According to the National Aikido Federation, aikido is a combat sport that applies locks and pressures against the joints.

The word hapkido also translates to three components: hap, ki and do. Hap is harmony, ki is mental energy or spirit and do is a way or doctrine. Hapkido refers to a martial art that combines physical coordination with the strengthening of the mind. Hapkido focuses on using peaceful tactics to redirect or divert physical attacks from an opposing force.

Aikido primarily uses the yu principle of tae kwon do. Hapkido uses both the yu and kang principles. The yu principle is founded on the concept of abandoning attachment and achieving ideal softness, or flexibility. The kang principle describes the application of energy during war. Essentially, you must apply your energy to a specific purpose and time; other purposes do not matter. For example, in standard combat you might use several techniques to fight off an opponent to protect yourself. The kang principle requires that you focus your mental and physical energy on a specific technique, one that will be most effective. Quality of movement is better than quantity of movement.

Both aikido and hapkido require a significant amount of physical endurance, but hapkido demands slightly more. The movements in aikido are applied in a more subtle way, but they require an ability to simultaneously focus mentally and physically to work against the opposing force. Hapkido involves a variety of kicks and kick-related routines. Hapkido demands substantial lower-body strength and physical endurance.

The primary difference in techniques for aikido and hapkido is the application. Visually, aikido techniques involve movements in a tighter sequence that appear to flow together. For example, a rotary throw looks as if you are exerting your force to throw someone to the ground. However, what is involved in a rotary throw is first securing an arm behind your opponent's back to lock the shoulder joint and prevent additional movement. Force subsequently is applied to bring the opponent to the ground. With practice, this technique is performed swiftly, appearing as though it is one movement. Hapkido is more focused on self-defense and uses weapons in certain elements of training. Hapkido primarily uses a circular theory of self-defense to guide you in the required movements. The circular theory of self-defense teaches you to move out of the path of harm, deflecting and intercepting the attack and preventing your attacker from hurting you. If you are being attacked head-on, you can move to the left or right before the moment of impact to avoid your attacker. Applying force to his arm would disarm him if he has a weapon, and applying force to his legs could disrupt his balance, making another attack less forceful.