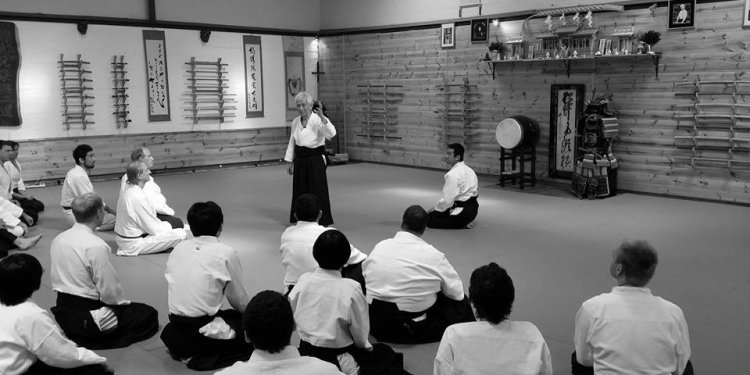 ‘Every river has a name. However, these names disappear when they flow into the great ocean. Aikido has many styles, many names, but Aikido is Aikido. It is my vision and hope that, like the rivers, they flow together and unite as one.’

Koretoshi Maruyama was born in Nihonbashi, Tokyo, on October 5, 1936. He graduated from the Economics Department of Keio University in March of 1956, after which he joined his father’s business, Maruyama Manufacturing. He became interested in the martial arts from his Middle School years, and at his father’s urging he took up Judo and earned a black belt. Again at his father’s urging, in his first year of college, he entered the Rikidozan School of Professional Wrestling, and also trained in weight lifting and boxing, while continuing his training in Judo at the Kodokan.

In the spring of his third year of college, he began to develop doubts about the martial arts of judo, wrestling and boxing, which emphasized a mere contest of strength. At this point he entered the Aikikai, as well as the Keio University Aikido Club. It was here that he found in Aikido what he had been searching for all those years, a martial art which did not depend on strength, and taught the right attitude of mind. After he graduated from Keio University, he continued his training in Aikido, while working in the family business.

In 1967 he delegated his responsibilities in the family business so that he could become a full time professional Aikido instructor, under the tutelage of the founder of Aikido, Morihei Ueshiba, and dedicate himself to the martial art that taught the principles of mind and Ki. In total he was a student of O-sensei for 13 years.

In 1971 he went to Hawaii for 4 months, to teach Aikido on each of the islands. In 1972, he resigned from the Aikikai to become the Chief Instructor of the Ki no Kenkyukai, founded in September of 1971 by Koichi Tohei Sensei, who granted Maruyama Sensei the rank of 8th-dan.