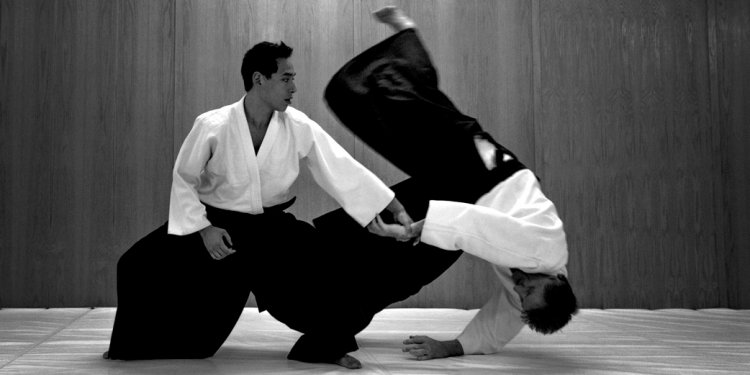 Many people who practice aikido have read the famous story titled “A Kind Word Turneth Away Wrath” written by Terry Dobson about an incident that occurred on a train in Tokyo. This tale gained fame due to its publication in “Reader’s Digest” sometime in the 1970s. It appears all over the Internet and is pointed to with pride by many aikido practitioners as an example of the lofty principles underlying the art and true conflict resolution. You can find the story here. I heartily recommend you read it.

Actually, I too have a true story to tell about a violent incident in which I was involved that took place on a train in Japan.

The incident took place in the early 1980s one morning when I was riding on a Tokyo subway. I was seated lost in thought when I noticed a commotion at the other end of the car in which I was seated. Two men had come to blows, and one was clearly dominating and had by that time thoroughly bloodied his adversary.

No one made any effort to stop the fight, or for that matter, do anything. My fellow passengers stared as if hypnotized by the violent spectacle unfolding before their eyes.

After a few seconds, something horrible was about to happen. The aggressor grabbed his hapless opponent by his collar and hair and started to bang his head against an upright steel post that people grab to steady themselves when standing. I don’t remember thinking about much of anything other than the man could be critically injured or even killed as a result of what was happening.

I immediately stood up and ran to the other end of the car. Neither man saw me coming. One was in a rage and the other dazed. As soon as I approached within a couple of feet of them, I let out probably the loudest kiai shout I had ever mustered in my life. The man who was inflicting the damage looked in my direction in a state of utter shock. He back away slightly.

Again, I don’t remember thinking about anything, but I reacted without hesitation and grabbed the arm of the victim and started quickly leading him away from the scene of the fight. He offered no resistance to what I was doing. I frankly doubt that he could even think coherently in the sad state he was in. I moved him quickly out the other end of the car and walked him down further about three cars away from the scene of the fight. I wanted to get far enough away in case the other man tried to follow.

By that time, the train was pulling into the next station, and I walked the poor man off the train and asked him if he was alright. Apart from being bloodied, he seemed to be okay. To be honest, I can’t remember much of what happened after that. The train we were on pulled away, and I waited for the next one to come to continue my journey.

I never saw either man again. I have no idea what happened to either subsequently. All I did was move unhesitatingly with full intent. I acted tactically to distract the two fighting men with a loud, unexpected shout, so that I wouldn’t have to get entangled in their fight. I chose to deal with the victim as I didn’t anticipate any resistance on his part. The attacker was as if paralyzed by the unexpected turn of circumstances.

Was this an application of aikido? I suppose so. I didn’t actually apply a technique. I personally did not feel endangered, but I was fearful of the fate that may have befallen the weaker of the two men.