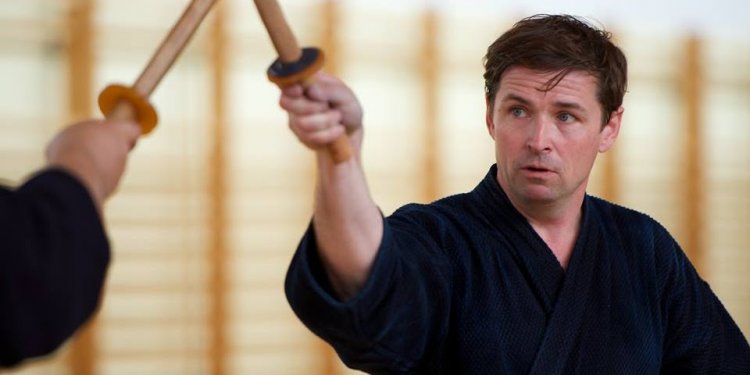 At the end of February, a group of international students graduated from the Tokyo-based Yoshinkan Honbu Dojo, one of the most intensive martial arts training centers in the world.

Yoshinkan (meaning “hall for cultivating the spirit”) is a style of aikido founded by Gozo Shioda after World War II. Made famous by the controversial book “Angry White Pyjamas” by Robert Twigger, the Senshusei Aikido training course was initially started at the dojo in 1957 to train members of the Tokyo riot police. In 1991 the 11-month program opened its doors to applicants outside the police force, and since then the course has attracted recruits from all over world.

One such recruit, Englishman Andrew Carter, 24, who graduated from the course this year, spoke to The Japan Times about his motivations for starting the program and his experiences over the nearly yearlong course.

“I always wanted to join the British Army’s Royal Marines when I was in my teens, but in university I went off the idea of the military — the killing people part — but I still wanted to experience something similar in terms of the training, ” he recalls. Then he read “Angry White Pyjamas, ” and after coming to Japan as an English teacher on the JET program, he decided to sign up for the Senshusei course.

Training takes place from 7:30 a.m. to 2 p.m. five days a week, so paying his way was going to be a challenge. Arriving in Tokyo from Nagoya with only enough money for one month’s rent, he shared a four-bunk hostel room with seven other people for the first two months of the course.

“I taught English to one of the guesthouse residents in exchange for food. I ate curry udon (noodles) for almost every meal for two months. One of the other guys, an American, had only pancake mix for two weeks of the first month.”

Carter could have saved more money to help him get set up, but, he says, “I believed that a hard life outside the dojo was also important for one year, so I didn’t mind coming with so little money. I was willing to endure the hardships it would bring.”

The Senshusei course is famous — some might say infamous — for the severity of the training. Injury is not just possible, it’s seemingly inevitable. The first training session of the course, says Carter, was “interesting.”

“It was an hour of nonstop, difficult exercises. Out of 10 of us, one guy’s legs gave out and he collapsed. I collided with another guy and he went to hospital with a cut to his head; I got a black eye out of that clash. One guy’s nose started bleeding due to too many press-ups.”

And this was only the first training session. For the next 11 months, Carter and his fellow trainees would endure three such sessions a day, five days a week.

“We all had bleeding backs due to hundreds of backward break-falls. The cuts would reopen each day and the backs of our dogi — uniforms — would turn red with blood stains. You’re not allowed to start a training session with a dirty dogi, so one of the guys would tape women’s sanitary towels to his back to soak up the blood.”

Carter had damaged his knees during running activities in school, which made certain trials in particular all the more severe.

“My knees can become very painful. It makes seiza — kneeling in the Japanese way — a nightmare. Two months of the course focus on suwari waza — kneeling techniques — so I wore knee supports, but other students who didn’t found their knees would bleed from pivoting on them so much day after day. My training partner ended up on crutches as a result of suwari waza and seiza.”

And if that was not enough, Carter also suffered back injuries.

“I damaged tissue around the lower back which lasted for about a month and a half. It made walking difficult. Sometimes I would collapse in work and my boss would have me over a table massaging my back.”

Despite this, Carter stuck with the course and soon settled into the rigors of it. Then, two months after starting, he and his fellow trainees joined the police recruits for two out of the three daily classes.

“They were a mixed bunch, ” he says. “Two of them were girls, one a mother of two kids, three young guys and two older guys. Most of them would stick out anything. One guy kept training with a dislocated shoulder for an hour.

“When one of the international students was injured, we could take time off, but when one of the police was injured, as soon as they were fit enough to return to the dojo, they would be back. And if they couldn’t train they’d be watching from the sidelines while standing in some sort of stress position. They were tough.”

Soon, they started to get to know each other and bonds started to form.

“They were quite friendly to us. During our breaks we would relax together, eat lunch and use each other’s medicines and ointments, etc. It is a requirement for the cops to have a black belt in a martial art before the course, so they were all black belts in judo, kendo or aikido.”

But the friendship with the riot police members was not confined to the dojo.

“We had three dojo parties throughout the year. We had to perform for the teachers with the cops for our first one. We had a lot of fun at those parties. Most dojo parties ended with at least one of us or a cop passed out through drinking too much.”

The police training course ended before the international students’ course, but that was not the last of the camaraderie between the two groups, Carter explains.

“The cops left in November, but in February they turned up at our graduation, which was really cool of them. We didn’t expect it, so it was a surprise.”

Another surprise was the mental toll the course took on its participants, says Carter.

“I expected harsh training, brutal teachers and pain in my knees. I also was prepared for the possibility that I would not be physically strong enough to hack the course, but I was physically able to do everything that was asked of me. What I did not expect at the start of the course was how mentally demanding it would be.”

Shugyo is a Japanese word that means “commitment to a discipline, ” and trainees on the Senshusei course must try to get a deep understanding of shugyo.

“Shugyo makes a great impact in the rest of your life; without some form of it, real training is impossible.”

Soon after starting the course, Carter came to realize that he did not fully understand this concept.

“Others were studying techniques in their spare time while I was working or resting. It soon became clear that I was the weakest in the group as I was constantly making technical mistakes. I spent many embarrassing training sessions in front of my peers making mistakes. It was during this year that I decided I needed to re-evaluate my way of approaching life if I am to ever to be worthy of my black belt, if ever I’m to fulfill my full potential as a human being.”