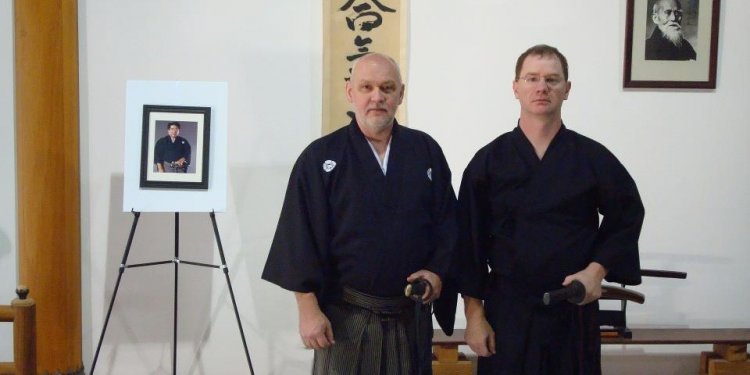 Iaido, a koryu bujutsu (traditional martial art), is the Japanese martial art of swordsmanship which emphasizes drawing and cutting with the samurai sword (called a katana) in a single fluid motion. Iajutsu is attributed to Hayashizaki Jinsuke Minamoto no Shigenobu, who developed this particular style of swordsmanship in the later part of the 16th century. The style we practice at Aikido of Cincinnati is Muso Jikiden Eishin-ryu with direct lineage back over 450 years to its founder. The current and 20th headmaster of our branch of Iaido is Miura Takeyuki Hidefusa, Hanshi, Judan (10th degree black belt) and founder of the Nippon Kobudo Jinshi-kai (Japanese Ancient Weapons True Spirit Assocation).

Iaido requires extreme precision of its techniques and demands tremendous concentration during practice, both of which ask a great deal of self discipline and sincere personal commitment on the part of the student in order to master them. As a reward for these efforts, it can offer the individual a lifetime of physical, mental and spiritual growth, as well as, an enlightened and peaceful state of mind.

Aikido of Cincinnati (AOC) is a Member Dojo of the KNBK/JKI through the Hombu Dojo, San Diego, authorized to conduct instruction in Muso Jikiden Eishin-ryu Iaijutsu. The instruction is conducted by a KNBK/JKI Shidoin level Instructor and activities administered by an Iaido Coordinator. We host an annual seminar presented by a high-ranking instructor and participate in annual general and instructor seminars.

The KNBK/Jikishin-kai International dojo at Aikido of Cincinnati emphasizes traditional practice and application of the techniques in the MusoJikiden Eishin-ryu curriculum. This curriculum encompasses the practice of waza (solo techniques of which there are over 40), katachi (paired kenjutsu (Japanese fencing) techniques using a bokken or wooden sword), and tameshigiri (test cutting using a live sharp sword or shinken on rolled mats). These three components serve to reinforce and improve each other to make the student of iaido aware of the proper body mechanics, focus, and technique for the effective use of the sword. All three of these, plus the integral observance and practice of sincere etiquette make up the core curriculum of our dojo.

We meet on Tuesdays from 8:00 pm to 9:30 pm. You are welcome to observe our class and can join at any time.

There are no special requirements beyond a sincere interest in studying and practicing the koryu art of iaido. You may start at any time and begin your study of this interesting and challenging traditional art.