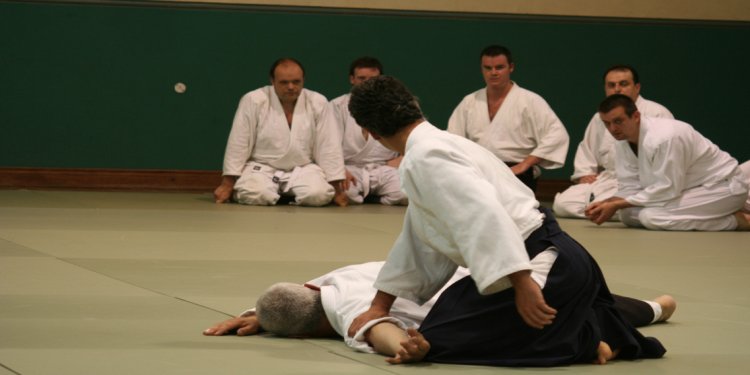 You are midway through a few rigorous Aikido exercises, and you realize that your face is turning red because you have been holding your breath the entire time. As regular cleaning of machine elements is required to keep an engine functioning smoothly, breath is an important, essential part of any sustained bodily movement. Most marital artists will tell you that you are most powerful when you exhale or kiai a shout delivered for the purpose of focusing all of ones energy into a single movement. Olympic track and field coaches instruct their sprint athletes to hold their breath when they assume the set position in the starting blocks, roughly one second before the gun goes off, and continue holding it until they are several steps out of the starting blocks, thereby producing an effect tantamount to a silent . Either way, many martial artists and athletic experts consider breath control an integral part of any reflective, explosive movement.

In humans, breath control is initiated and maintained by the central nervous system (CNS). First, the CNS must produce a rhythm for the periodic cycle of contraction and relaxation of respiratory muscles. Second, the CNS must adapt and adjust this rhythm so that the appropriate inhalation and exhalation of the lung is maintained for proper blood gas (dissolved oxygen and carbon dioxide) homeostasis. Third, the CNS must integrate respiratory movements with other body movements such as speech, swallowing, postural changes, and locomotion.

To produce rhythmic respiratory action, the CNS operates by utilizing aggregates of motoneurons nerves that connect directly to and stimulate muscles. Motoneurons responsible for the breathing mechanism originate at the brainstem (rear side of the lower head and upper neck) and extend to the lumbar (lower back) regions of the spinal cord; motoneurons carry an excitatory signal from the brainstem, down the spine, to respiratory muscles, which contract upon stimulation. The minimum neural circuitry necessary for the pattern generation of rhythmic breathing is contained within the pons and medulla, located within the brainstem. In mammals, rhythmic contraction of the respiratory muscles continues to function even after the cerebrum and cerebellum have been removed. The cerebrum controls higher cognitive function, such as thought, logic, emotion, and memory, and the cerebellum is responsible for the regulation and coordination of complex voluntary muscular movement as well as the maintenance of posture and balance. Thus, the brainstem alone is responsible for rhythmic generation of your breath patterns; moreover, breathing patterns can persist even if the rest of the brain is clinically dead. However, simple rhythmic breathing is not conducive to survival in a dynamic world, and the CNS must adjust breathing patterns to adapt to changing internal and external environments.

When you engage in strenuous exercise, your tissues require increasing amounts of oxygen to maintain heightened activity levels. The CNS must determine how much to increase breathing rate to adequately supply the body with oxygen, while expelling used up oxygen in the form of carbon dioxide. To determine the adequacy of ventilation and to optimize the effort expended in breathing, the CNS depends upon feedback from chemoreceptors. Chemoreceptors are molecules on the surface of cells in the body that respond to specific chemicals or molecules, such as oxygen, and their essential function in breathing is to provide information to the brainstem about the status of respiratory gases (oxygen and carbon dioxide) so that optimal activity levels can be maintained. If chemoreceptors found in major blood vessels detect increased levels of carbon dioxide or decreased levels of oxygen, they send this information to the brainstem. The brainstem then sends signals to the respiratory muscles to increase the tempo and depth of breathing. The major respiratory muscles that make breathing possible are the diaphragm, which separates the abdominal (stomach) and thoracic (chest) cavities, and the intercostal muscle groups, which are located between the ribs. Normal breathing is accomplished by contracting the dome-shaped diaphragm downward into a flat shape. This contraction increases the volume of the thoracic cavity and lowers the pressure inside the lungs. Since air prefers low pressure to high-pressure environments, air is sucked in through the nostrils, travels down the windpipe, and enters the lungs (i.e., inhalation). We exhale by relaxing the diaphragm a primarily passive process into its original dome shape, which decreases...